Kenyans came out in large numbers on Tuesday ninth of August and exercised their democratic right through voting in leaders that will rule them for the next five years in different elective political positions as MCAs, MPs, Senators, Women Reps, Governors and in the Presidency position. This means Kenyans will hold another general election in the year 2027.

After the winning the race, the Kenya Kwanza Alliance fraternity nominated the Bungoma County Senator Honorable Moses Wetangula for Speaker of the National Assembly slot.

At the parliament, Wetangula won the seat against his close contestant the former Speaker of the National Assembly honorable Kenneth Otiato Marende of the Azimio La Umoja-One Kenya Alliance camp.

Wetangula was then sworn in as the new Speaker of the National Assembly. Wetangula succeeded honorable Justine Muturi who is currently the Attorney General appointee in Ruto's government.

The nomination of Hononorable Wetangula for the Speaker post made him to resign making his senatorial seat to remain vacant.

Due to the vacant position in his previous seat, the Independent Electoral and Boundaries Commission (IEBC) chairperson Mr Wafula Chebukati has announced that Mr Wetangula's previous seat will be taken by someone else through by-election which is now scheduled to be held on 8th of December 2022. 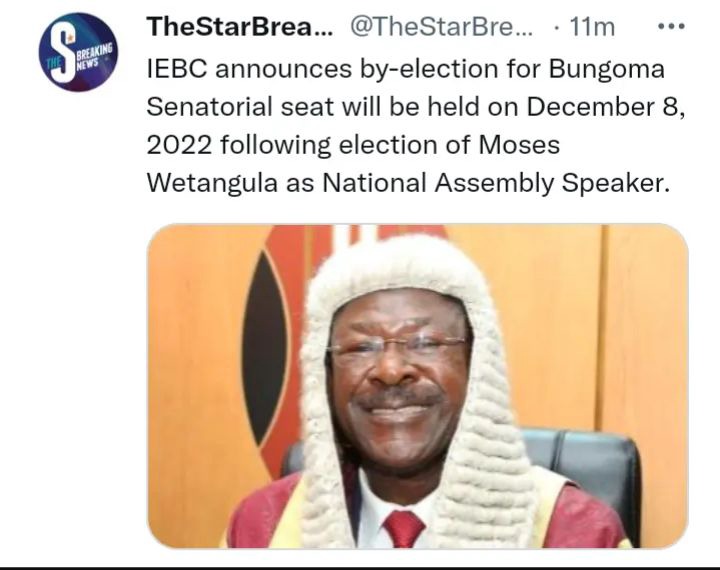