By KingRyan (self meida writer) | 18 days 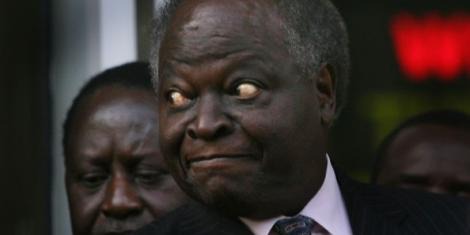 The Kenya Year book shows former President Kibaki as a man who has shunned lesser politics. However, the call of duty, once saw him move to the streets due to his stand as the leader of opposition.

As reported by lawyer and human rights advocate Njonjo Mue, the incident of May 31, 1997 lead Kibaki head on with the itchy endeavour with teargas inhalation for the first time.

However, the civil society bodies had united hands with the opposition for a huge rally at Uhuru Park in efforts for constitutional amendments ahead of approaching General Election.

Mue discribes that Kibaki as the official leader of opposition appeared at the park followed by Kiraitu Murungi, Martin Shikuku, Kennedy Kiliku and James Orengo.

In their usual manner, the police lobbed teargas canisters towards the mass, hitting them aimlessly with the former President discovering himself in unusual waters.

"I recall Kibaki, who had never been in the battleground before, choking and in tears appearing completely lost. We offered him some water simply because we had the idea that he might collapse.

"As he recuperated, he said unforgettable in Kikuyu, “Kai ikoragwo ii nduru atia? Uguo niguo muiguaga? Kweri mukiri omiriria.” (You mean it injures this much? Is this the way it always is? then you people are fearless!)," the activist recounts.

Content created and supplied by: KingRyan (via Opera News )