Dagorreti North MP Beatrice Elachi has highlighted the type of backlash her party's leader Raila Odinga is facing after claiming that Uhuru Kenyatta and William Ruto messed wrecked the country.

Elachi claimed in her statement that after joining Uhuru and Ruto's camp, Raila was forced to shoulder the load they had put on him.

The ODM lawmaker asserts that Raila was unfairly blamed for all wrongdoing for which he was not a party and that this is why it affected him so severely.

She went on to say that Ruto and Uhuru, who were in the same government, supposedly caused trouble for the nation by fighting against government contracts, but they split off and started fighting once the venture proved to be too difficult.

Ledama Olekina, a senator for Narok, warned Kenyans not to accept the Hustler Fund, stating it was an illegitimate initiative that hadn't been approved by the National Assembly.

The politician warned anyone taking the loan without reviewing the terms and conditions, claiming that President Ruto does not have free money to hand out to Kenyans' pockets through the Hustler Fund initiative. 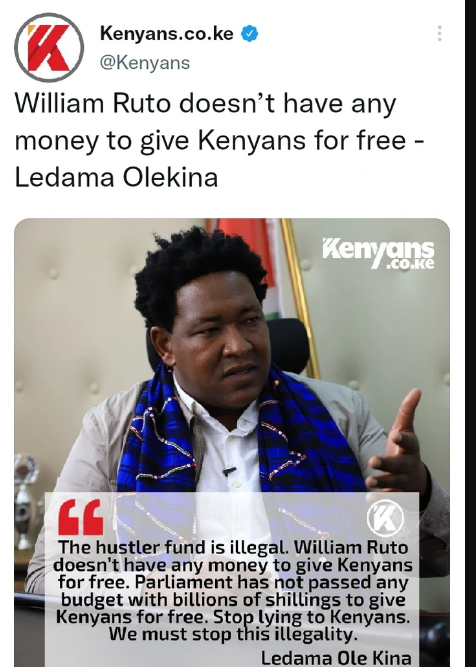 Additionally, he has asserted that the Hustler Fund is an illegal scheme that might get the President into problems because the Parliament has not approved it.

Is the hustler fund illegal or not? And who is to blame for the country's current situation? Please let us know your thoughts and follow the page for more news.