By Jobcentre (self media writer) | 3 months ago

Raila Odinga is a long standing political enigma who has survived a lot of political dynamics in this country. However great he is, he has failed to win a single election after contesting in four various occasions ranging from 1997,2007,2013 and 2017. Raila Odinga is now vying for presidency for the fifth time after with the back up of President Uhuru Kenyatta. 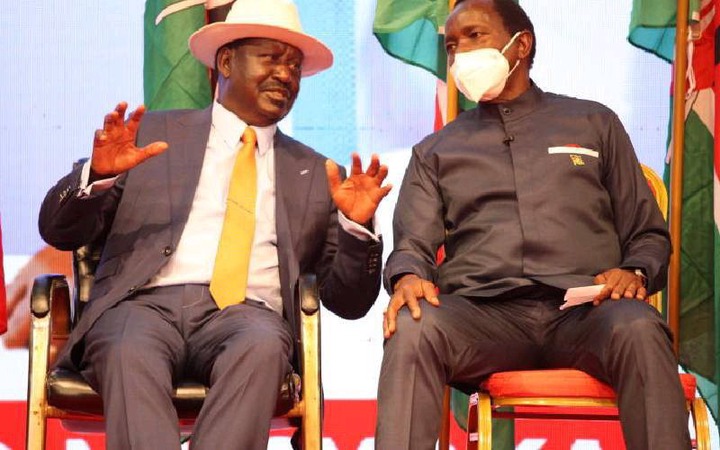 However, Raila Odinga is facing a hard task to convince wiper party leader Kalonzo Musyoka to join hands with Azimio la Umoja movement. Raila, speaking in Lavington, said that he is not forcing anybody to join his Azimio La Umoja camp, in reference to Kalonzo and his OKA coalition. Various reports have now revealed that the ODM leader has given up on trying to convince Kalonzo to team up with him, allegging that Kalonzo is reviving the 2017 pact. It is for this reason that Daily Nation have reported the reason that Raila announced that he will only work with those interested in joining him henceforth.

Raila on Monday confirmed the claims that he doesn't expect Kalonzo and his team at his party's delegate's meeting on Saturday, and only expects Azimio members who have rallied behind him.

“We’re not expecting any guests. What will happen is that there will be forms that willing parties ready to work with Azimio will sign,” he stated.

However, it is reported also that Cyrus Jirongo And Gideon Moi are considering joining Raila Odinga's Presidential support team a head of August General.

Diana and Bahati Open Up on the Pregnancy Romours

Recipe: How To Prepare A Delicious White Fried Rice With Vegetables

Personality Traits Based On Sitting Position.