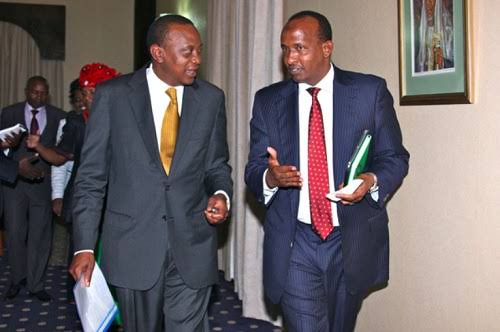 In March 2018 the President and the opposition leader Raila Odinga met at Harambee House and gave a speech about how they had decided to put their differences aside and serve the nation. In exchange, however, the deputy president William Ruto was the casualty in the handshake deal.

He has been consequently sidelined and "humiliated" in government by his boss who has since embraced Raila seemingly as Ruto's replacement. Uhuru has more than once signalled that he is not going to leave his seat for Ruto. He has instead sent strong signals that Raila is his preferred successor.

However, Garissa Township MP Aden Duale thinks otherwise. The MP claims that betrayal politics is at its peak and Uhuru will inevitably betray Raila and choose Ruto over him. Duale says that he has more than once asked Uhuru who his preferred successor is and the head of state has always pointed out that he has never changed from Ruto.

"More than 20 times I have asked President Uhuru Kenyatta if he has an issue with Deputy President William Ruto and he says he has no problem.

I've also asked him whether he has another preferred candidate, and he asked me in my face, where did I say that William Ruto is not my candidate?" He said in an interview.

Duale says that Uhuru is embracing Raila only for the stability of the country but in the real sense nothing ever changed since 2013. In reality, the narrative, Uhuru Kumi, Ruto Kumi is still alive but in the shadows.

"People are only telling you one side of the story. The politics of betrayal, deceit and backstabbing is a common denominator in Kenyan politics," he added.