By Lamawek (self media writer) | 2 months ago 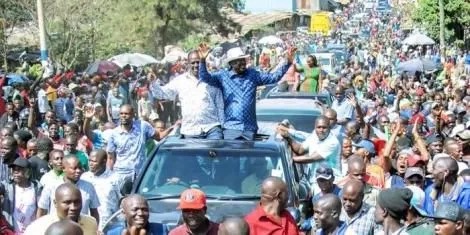 No elections will take place in the nation, according to Azimio leader Raila Odinga, unless vice chair of the Independent Electoral and Boundaries Commission (IEBC) Juliana Cherera and three other commissioners are reinstated.

Speaking on December 7 at the Kamukunji Grounds, he urged Ruto to withdraw his decision to suspend the four, warning that failure to do so could result in protracted civil conflict.

He pledged to oppose Ruto's attempts to use his conduits to control any upcoming elections in the nation.

"We must prevent Ruto from establishing a committee that will serve as his puppet. Otherwise, there won't be any elections "Odinga declared.

The President was given until the end of the year to undo the reforms and in exchange, Odinga promised not to convene any consultative forums until 2023.

He insisted, nevertheless, that the concurrent Jamhuri Day celebrations in the Jacaranda grounds on December 12 would proceed as scheduled.

Supporters of the former prime minister discussed some of the difficulties they were having with President Ruto's administration during the event.

The debates were dominated by unemployment and the high cost of living. The recently introduced Hustler Fund's low limit was another issue raised by the youth.

Odinga urged the government bring back the abandoned Kazi Mtaani project until the start of the tree-planting initiative, which was presented as its substitute but was unable to provide food for the public.

While this was going on, some influential figures suggested that young people turn their Hustler Fund loans into grants instead of repaying them. Nairobi Senator Edwin Sifuna was among these figures.

In response to the rise in the price of essential goods, Ruaraka MP Tom Kajwang' threatened that the leaders would march to State House and demand food.

Azimio presented the President with 11 demands as part of the Kamukunji Declaration, some of which dealt with reducing the cost of living and subsidizing school fees.

Content created and supplied by: Lamawek (via Opera News )