Deputy President William Ruto,the Ford Kenya leader Moses Wetangula and ANC party leader Musalia Mudavadi have kick-started their joint presidential campaigns as they promised on January 23 during the ANC delegates convention to work together ahead of the August, 9th General Election. 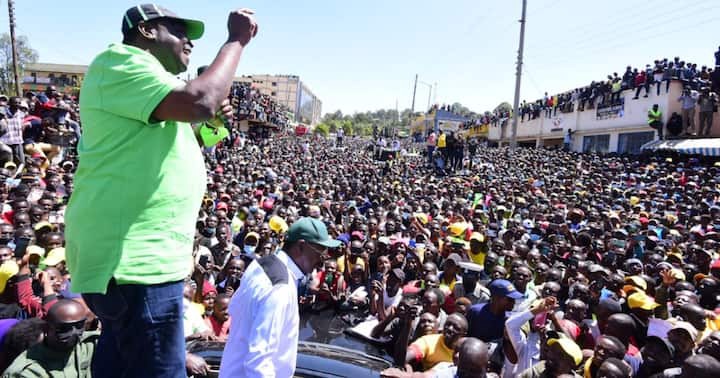 They resolved to work together and combine efforts ahead of the August 9 presidential vote hunt. On Wednesday, January 26, the trio in the company of their allies started off their joint rallies in Eldama Ravine, where they made stopovers to drum support for their new formation and to take that opportunity to introduce their alleged manifestos a head of elections.

Musalia Mudavadi who unveiled his presidential bid and plans on January 23(Earthquake notion) during his outfit's convention has based his campaigns on the "Pesa Mfukoni" an economic initiative he believes will empower the lowly income earning Kenyans. His newly bond formed partner, and the deputy president if Kenya William Ruto, has been on record advancing the bottom-up economic model that he argues will boost the small scale traders,farmers and other group of hustlers. He believes that trickle down economy or model will bridge the gap between the poor and the Rich.

They started their joint campaigns on Wednesday, January 26, traversing Baringo county before making their way to Nakuru where they will be holding their grand rally.

Another Big Politician To Vie For Senatorial Seat Again