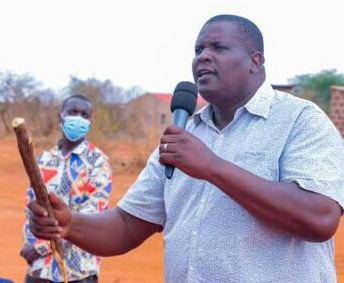 A team of 4 MCAs who were involved in delivering victory for Timothy Maneno in the just concluded Nguu/Masumba by election have dismissed Ambassador Kiema Kilonzo as a blind Wiper sycophant.

The four; Francis Ngunga of Mua Ward, Titus Kaloko of Kangundo West ward both from Machakos County as well as Jades Kalunda of Kikumbulyu South and Musee Mati of Mutonguni ward in Kitui County also warned that tough times lie ahead for the Wiper party after the massive defeat in which their candidate Eshio Mwaiwa came a distant third.

In a hard hitting statement, the four MCAs accused Amb Kiema of being sycophantic to Kalonzo in order to win his favour for the party's ticket for his difficult Kitui's gubernatorial ambitions.

The leaders were reacting to Amb Kiema Kilonzo's statement in which he struggled to convince Kenyans that Wiper party was still strong in Ukambani even after the embarrassing defeat. They noted that Kalonzo's hold had weakened, saying the former Mutitu MP should stop wallowing in ignorance.

"Kalonzo himself made it known that the by election was a litmus test for his acceptance as OKA presidential flag bearer. He even brought other OKA principals around to campaign for their candidate whom we successfully defeated. People like Kiema must wake up from their deep slumber" said Hon Ngunga.

The MCAs were part of a larger team of leaders and professionals coordinated by Kibwezi West politician Mwengi Mutuse to deliver victory to Timothy Maneno who was running as an independent candidate.

The MCAs noted that Ukambani residents are interested in politics of development as opposed to blind party sycophancy that revolves around failed kingpins as demonstrated by the desperate Kiema.

Below is the full statement from the 4 MCAs

While it can be said that political sycophancy is sometimes good, it also needs to be exercised from a point of knowledge and engaging brain.

The lazy and defective narrative being peddled by Ambassador Kiema Kilonzo in his impotent bid to defend the obviously wounded Kalonzo Musyoka casts him a sycophant of low thinking.

However, we are informed that Hon Kiema feels beholden to Kalonzo because he wants to catch his eye so as to be favoured with Wiper party ticket for his gubernatorial bid.

Let us remind Hon Kiema of some salient facts as below:

1. In his own words, Kalonzo pleaded that Nguu was a litmus test for his bargaining to be the OKA torchbearer. Why didn’t the people buy this and vote to save his bid if they love him as much as Kiema wants us to believe?

2. Wiper campaigned on the platform of popularity and that anyone can win on its ticket. Why was this popularity not reflected in the final results ?

3. Talking of past elections, what about Mutonguni loss to Maendeleo chap chap in which Hon Musee Mati defeated their candidate?

4. Talking of Nasa victory, does Hon Kiema factor the contribution of other players at the time like Prof Kibwana ? Would the results have been the same without their support ?

5. About Machakos senatorial elections, only 19 percent of the voters turned out to vote. The rest boycotted after the events which led to the withdrawal of Hon. Mutua Katuku, their preferred candidate.

In Mavoko for example, only about 6,000 people voted against a registered close to 130,000 voters.

Is it difficult to see that the boycott was a clear protest against wiper ?

Is Hon Kiema privy to these facts or he is blinded by sycophancy and ignorance?

Hon. Kiema and his ilk should know that the Kamba populace is fast moving away from choking party politics. The electorate know what they want and will vote their preferred candidates regardless of the party.

If Kiema is the type that is banking on Wiper ticket to race into political leadership without a plan for the electorate, then we feel sorry for him. His will be a resounding fall.