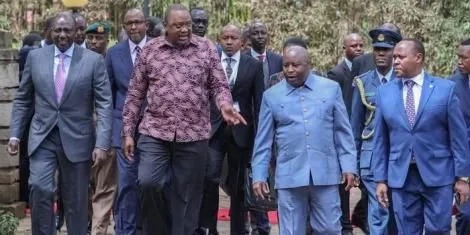 Former head of state Uhuru Kenyatta and President William Ruto met for the first time in public since the new government took over.

The meeting happened on Monday, November 28, at Safari Park where they marked the Third Round Inter-Congolese Peace Consultations popularly referred to as Nairobi III.

However, photos of the two leaders taken during the event sparked mixed reactions from Kenyans of all walks of life.

The contentious photo, which was widely shared on social media had Ruto to the left, Uhuru, followed by Burundi's President Évariste Ndayishimiye and Dr. Peter Mathuki, the Secretary General of the East African Community (EAC).

The four were flanked by top government officials, including Defense Cabinet Secretary Aden Duale who was right behind President Ruto.

Further, Uhuru appeared to engage with Ndayishimiye and Mathuki, as Ruto seemed to be only listening to the conversation without much engagement - and this caught the attention of many.

For the vocal Nandi Senator and a close ally of Ruto, what happened at Safari Park Hotel was a sheer breach of protocol.

Responding to the Senator's stance, lawyer Miguna Miguna also agreed that something was amiss with the photo. But for the vocal advocate of the High Court of Kenya, the media was to blame.

"I believe the issue is the way the cameraman and the media projected the image. Both Uhuru Kenyatta and President William Ruto appear to be walking down a raised pathway while others are to the side or behind. But the usual suspects had Uhuru in the middle," stated Miguna.

Digital Communication strategist Pauline Njoroge who was among the first people to share the photo online stated that the photos were symbolic.

“This picture speaks volumes. Students of power, you can tell us more,” she captioned the image posted on her Twitter account.

Political advisor Nahashon Kimemia noted that the right procedure was followed as the two heads of state present were equal.

“Talks on armed conflicts are Uhuru Kenyatta's show because he is our regional peace envoy. Therefore, he should be in the middle of the pic. President Ruto and Evariste Ndayishimiye are theoretical equals and it is only fitting that they appear on both sides of Uhuru, as equals,” he uttered.

The debate coincided with Uhuru's return to social media after a three-year break. The former president's office now has presence on Twitter and Facebook.

In his speech at the event, Ruto praised Uhuru for agreeing to pursue peace in the DRC after he was appointed as special envoy.

"You may wish to know that my predecessor, President Uhuru Kenyatta here, and myself were on different sides of the political contest two months ago and the competition was stiff. After the elections, I met his excellency the president, looked at him in the eye and I told him, 'Mr President, you have started a very important process in the EAC and I would like you to continue that process,' and he told me he was ready to do it despite all that had gone on,” he announced.