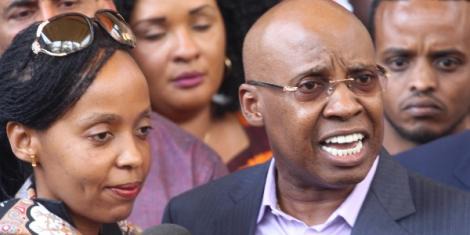 Wanjigi, a prominent businessman, claimed that the party had lost focus since deciding to work with President Uhuru Kenyatta's administration.

Speaking to residents of Kathageri, Embu County, following a Sunday Service in the area, Wanjigi protested that the party has been marred by deception and compromise as a result of the handshake between Kenyatta and Odinga on March 9, 2018.

"This isn't ODM at all." This is the ODM of conmaship who has arrived. "This conmanship and pride came after shaking hands with UhuRuto," Wanjigi explained.

Wanjigi has thus summoned Raila Odinga to intervene and save the party from impending doom, failing which he will convene a delegates meeting to chart the way forward.

Wanjigi, a harsh critic of the Jubilee government, went on to say that the administration had messed up the country's economy and that the party would not be associated with such failures.

"Those who have caused the country's economic collapse are now claiming to support my party's leader." "That is not possible," the businessman-turned-politician stated.

He has continued to criticize the party's leadership for their management style, emphasizing the importance of free and fair party nominations. Wanjigi has vowed to compete with Raila Odinga and other aspirants in the party primaries for the position of presidential flag bearer.

The businessman was a formidable force in UhuRuto’s in 2013, where he admitted to running a parallel vote tallying center for the duo.

He later switched camps towards the 2017 general election joining the Raila-led National Super Alliance (NASA), performing a similar role of operating a parallel tallying center to that of the Independent Electoral and Boundaries Commission, (IEBC).