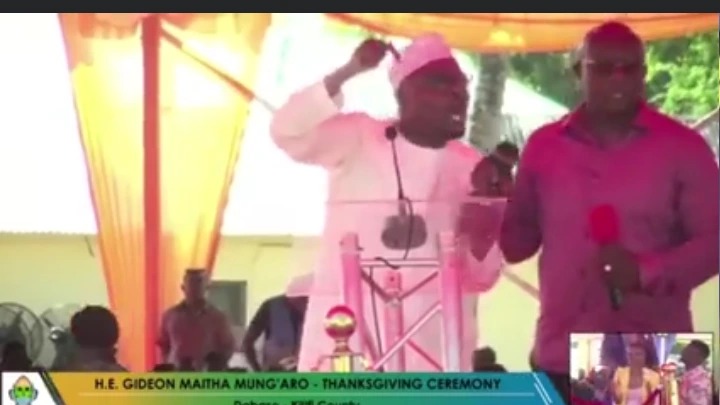 There was a dramatic turn of events during the thanksgiving ceremony for ODM-backed Kilifi Governor Gideon Maitha Mung'aro.

An invited Muslim Sheikh went out of his way to criticize President William Ruto's administration. The Sheikh claimed the president's selections and policies showed bias against Muslims.

The religious leader then brought up the recent event of Christian prayers being held at State House by the Head of State. He believed that the State House should be shared by all faiths and not just Christians.

"Our shared home at the State House. When it comes to issues of faith, the president shouldn't take sides "as the Sheikh put it.

Before the religious leader could continue his remarks, Owen Baya, the MP for Kilifi North and the deputy majority leader in the National Assembly, went to the podium and snatched the microphone away from him.

The UDA politician, visibly shaken by the Sheikh's comments, told him to take a seat. He pleaded with him to desist from his attacks on the president. Separation of Muslims and Christians was another charge he leveled at the Sheikh.

"Put an end to your attacks on the president in an effort to drive a wedge between Muslims and Christians. Not in this town, no sir. Please take a seat. Stop preaching your hardline beliefs in this town and take a trip to Mombasa "the Baya said.

Upon returning to his seat, the Sheikh began to rant. "Truth hurts!" he said.