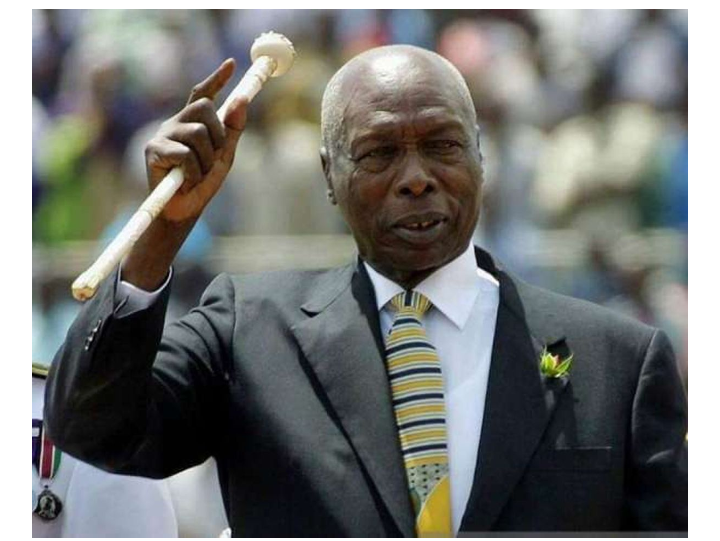 Former head of the defunct Presidential Press Service (PPS) who is now former President Daniel Moi's Press Secretary Lee Njiru, has revealed how Moi's symbolic 'fimbo ya Nyayo' had once to be flown from Nairobi to Australia after the one he was carrying fell down and broke.

Njiru speaking on Citizen's Jeff Koinange Live show on Wednesday, said that Moi and his entourage had just finished having lunch at the house of the then Los Angeles mayor and was leaving when his ivory symbolic 'fimbo' fell on the staircase breaking into two.

"Before Los Angeles, we had just left New York where the President was addressing the United Nations General Assembly. We were leaving the mayor's house to proceed to Sydney, Australia where Moi was due to attend the Commonwealth Head of States and Governments Meeting which we had baptized as Chief Holiday on Spending Governments' Money," Njiru said.

He added that after the 'fimbo' broke, Moi's aides immediately called Nairobi instructing one of his personal assistants who had been left behind to immediately fly another 'fimbo' to Sydney before Moi arrived there.

"There was no discussion about that. The assistant had to take a flight to Johannesburg immediately and be in Sydney ahead of Moi's arrival. The 'fimbo' was his trademark and there was no way he was going for that meeting without it," Njiru said.

Njiru notes that by the time Moi and his Kenyan entourage were arriving in Sydney, the assistant was already there with the 'fimbo' which he handed to Moi before he could alight.

"Very few people in our entourage knew what had transpired. That is when I came to realise the impetus of power," he added.

Boost to Man United as Rashford, Mactominay and Fred in the 1st Squad Ahead of the Atlanta Clash