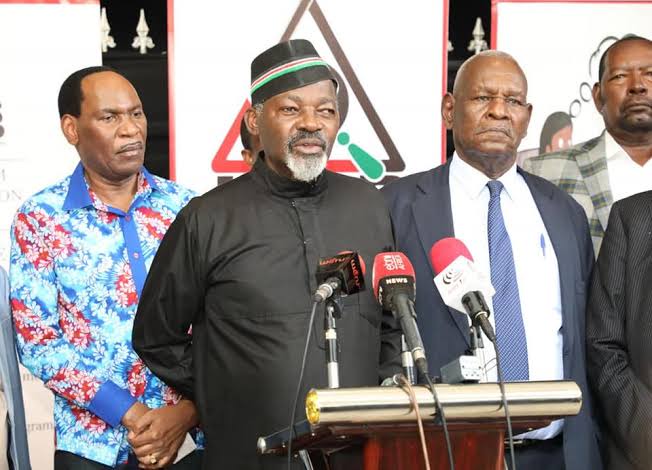 President Uhuru Kenyatta's first cousin Mr Kung'u Muigai spoke to NTV on Monday, July 4 regarding the state of the country 35 days to the election.

The Kikuyu Council of Elders patron gave his verdict on the frosty relationship between President Uhuru and his deputy William Ruto.

The two during the weekend openly displayed the bad blood between them through their bare-knuckle war of words. Uhuru had asked his deputy to stop issuing empty promises to Kenyans in the name of a manifesto triggering a reply from the DP who asked his boss to stop attacking him even though he has declared his unwillingness to support his presidential bid.

Kung'u Muigai blatantly told off the duo noting that it was saddening to see the two most important offices on the land fighting each other adding that they are embarrassing the nation.

"It is so saddening to see the president and his deputy fighting each other. It is also embarrassing to the Kenyan people. I have never even known the reason why they are not seeing eye to eye despite asking them severally to tell me. How do they expect the upcoming generation to view them? He posed.

The recent outburst between the two started when Ruto mentioned that he may prosecute Uhuru for what he called state capture and cronyism of the government.

Muigai, although having not declared it outrightly, seems to be supporting the Kenya Kwanza Alliance presidential candidate in the coming elections due to his constant meetings with Ruto where they discuss politics. He has also distanced himself from Uhuru's engagements with Azimio la Umoja One Kenya coalition presidential candidate Raila Odinga.