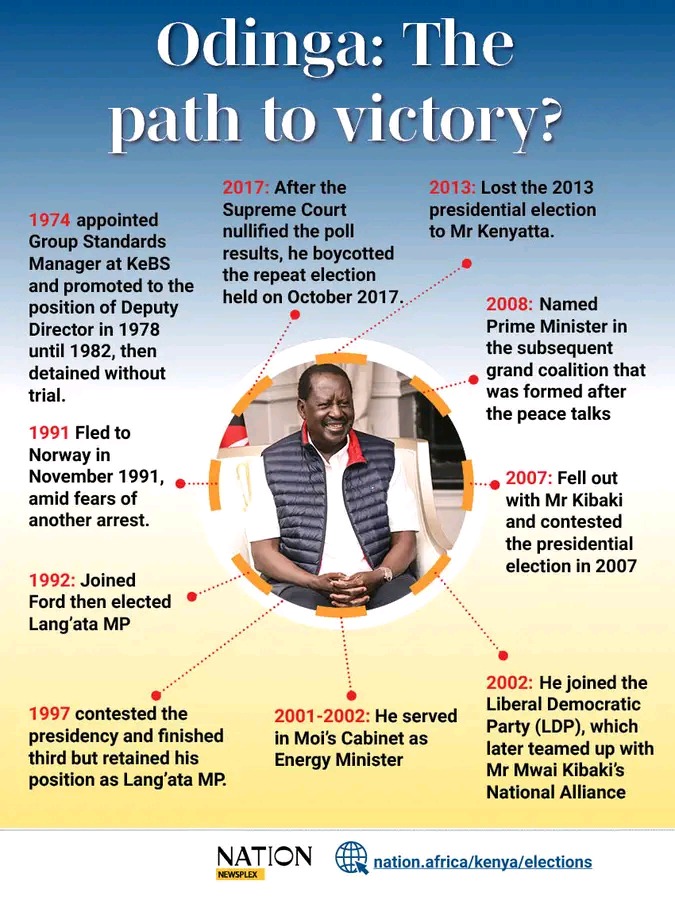 Raila's path to succeed the country's top seat has taken many decades with success and failures.

In 1974 he was appointed group standards manager at Kebs and was later promoted to the position of deputy director from 1978 to 1982 after which he was jailed without trial.

Later in 1991 he fled the country and got refuge in Norway in 1991 after he feard a second arrest.

One year later in 1992, he joined politics and was elected as Langata member of Parliament in a Ford Kenya party ticket.

In 1997, he vied for presidency but didn't clinch the seat after becoming third although he retained his Langata seat.

In 2002, he shifted to liberal democratic party and joined hands with Mwai kibaki's national alliance and they won the 2002 presidential election.

Five years later in 2007, their friendship with Kibaki ended and he sought to run for presidency where he failed to clinch the seat.

After the heated 2007 post election violence he was offerd the prime minister position in 2008 after a peaceful talk which he accepted.

In 2013 general election, he contested for presidency but also lost the election to TNA's Uhuru Kenyatta.

In this year's general election, Mr Raila Odinga is vying for presidency for a 5th time. His closest competitor is UDA's Leader, William Ruto.

Reason Why Citizen, NTV, KTN, K24 Are All Showing Different Results For The Presidential Election

Vocal Rift-valley Lawmaker Defeated as He Defended his Seat [VIDEO]

Chebukati Laughs At The Media For Slow Result Release