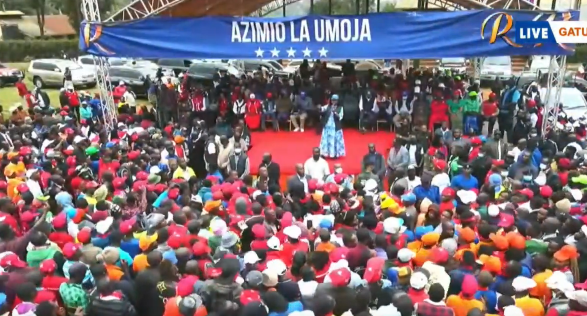 The Azimio La Umoja One Kenya Alliance deputy presidential candidate Martha Karua is leaving no stones un-turned, in bid to woo Mount Kenya residents in to supporting the camp ahead of the August polls.

Karua who has been reported to help Raila in 'climbing' the region and giving Deputy President William Ruto and his camp a run for their money across the region has called upon the residents not to vote blindly come August.

Karua who was speaking on Wednesday during Azimio's rally led by Raila in Gatundu, Kiambu County, said that the Former Prime Minister is the best bet for the country, as he will fight against graft and revive the economy.

The Former Justice Minister went on to term Raila as a patriotic leader who is always mindful of the interests of other people, saying that the Raila who supported Late President Mwai Kibaki by saying 'Kibaki Tosha,' is the same man who agreed to have an handshake in 2018 with President Uhuru Kenyatta following the 2017 disputed presidential elections. 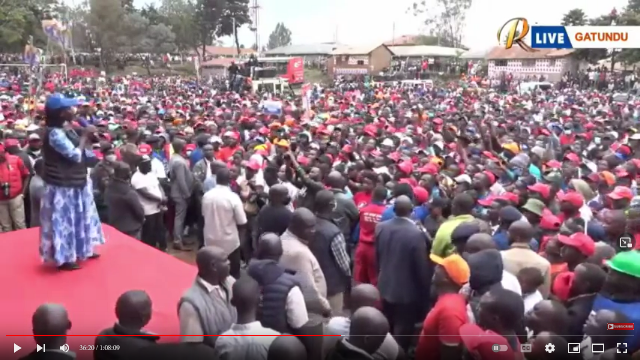 "Those who were saying that Baba cannot climb the mountain can now see. His basket has good things for all of us and if you see me in Azimio as the running mate, you are also represented. When Raila united with Kibaki we got a new constitution and a new government," she said.

"The same Raila who said Kibaki Tosha and had handshake with Uhuru for the peace of this country, is the same Raila who is now asking for your votes. He has experience in politics and he is patriotic."

Karua further slammed Ruto following the audio clip that leaked where it is alleged that the DP was almost hitting on Uhuru after the repeat polls, saying that such a man who is full of temper and alongside his camp should not be elected as the president.

VIDEO:Some Kenyans Have Decided Not to Vote in the August General Elections

President Uhuru Confirms They Entered Into a Deal With DP Ruto, Reveals What Happened