By Top_Trending_NewsUpdates (self media writer) | 1 month ago

Aden Duale has finally opened up about what happened between him and president Kenyatta concerning the fallout of the larger Jubilee party coalition. This is the coalition which saw Kenyatta and Ruto remain in power for two consecutive times. However, fallout struck between president Kenyatta and his Deputy, Honorable Ruto. The two no longer support each other's political ideologies in public.

Speaking to NTV'S Vincent Odur, The former majority leader, Aden Duale said he was really close to both Kenyatta and Ruto. But he could sense there was something falling out between the two top leaders. When he asked the president, he initially denied it and said everything was okay between the two.

However, at one time while Duale and Kenyatta were taking tea, Kenyatta openly revealed to Duale that the 'political marriage' between him and Ruto had broken up. The president then went further to tell Duale to choose between him and his deputy, Ruto.

In his confession, Duale said he was a Muslim and his loyalty to Ruto could not be swayed aside by few confidants surrounding Kenyatta. According to Duale, these people surrounding president Kenyatta had convinced him to drift from Ruto. 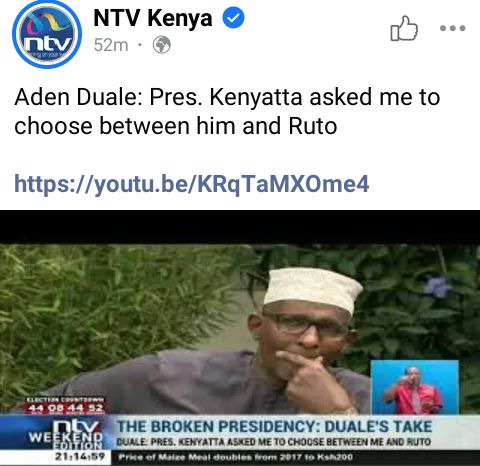 Content created and supplied by: Top_Trending_NewsUpdates (via Opera News )