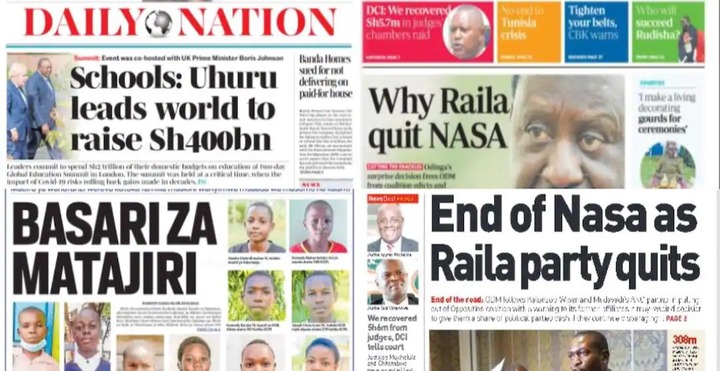 The dailies also reported the end of National Super Alliance (NASA) coalition after the Orange Democratic Movement (ODM) announced its exit from the coalition.

According to the daily, Directorate of Criminal Investigations (DCI) claimed it recovered millions of shillings from two judges suspected of engaging in graft.

“The DCI had received intelligence on July 21 at 3pm that after a series of meetings between certain judges and brokers, a KSh 7 million bribe had been agreed upon and it was to be delivered to the residence of a judge at 7pm,” Karisa said in an affidavit.

The officer said the venue was abruptly changed, and another meeting was scheduled for July 22 at 7:45am at Muchelule’s chambers within Milimani Law Courts with Justice Chitembwe facilitating the meeting.

In a statement, the party said it was quitting the coalition to focus on building new election partners as the much anticipated 2022 General Election nears.

“We still hold that NASA is the past. To further demonstrate this point, the National Executive Committee (NEC) of ODM has today resolved to formally exit the NASA coalition,” said the party’s secretary-general Edwin Sifuna.

Suspected killer cop Caroline Kangogo was on Thursday, July 29 laid to rest in an emotional send-off attended by hundred of mourners.

Further, the family honored Kangogo’s wish and buried her in a wedding gown in the ceremony that police officers kept off.

Speaking at the ceremony, her family mourned her as a humble person contrary to what was said about her.

“Many things have been written and said about my sister. The Caroline you read and heard about is not the one we know. She was a humble girl and we were happy whenever she was around,” said her brother Mark.

According to the Swahili publication, divisions have emerged between politicians in the Western Region ahead of President Uhuru Kenyatta’s visit scheduled for August.

A section of leaders from the region threatened to boycott the meeting arguing that they were not involved in preparations.

Led by Matayos member of parliament Geoffrey Odanga, the leaders said Uhuru’s visit should not be used by politicians for selfish gains ahead of the 2022 General Election.

“We want an assurance from the president that he will come and launch development projects that will benefit our people before the country goes to the polls,” Odanga said.