Once you are a politician you act politically and if you happen to be a long serving politician then you become an ambitious calculating political schemer. 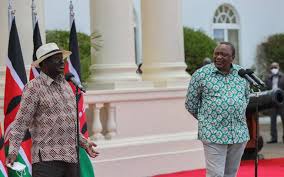 There was a big mistake here since the standard procedures was never followed. Constitutionally any attempts at changing the constitution should be driven by Kenyans but not involving a president or an opposition leader only.

I believe Raila knew all this and he had to invent a crisis so that it fails as an end game. How did this happen?

Uhuru invited Raila into doing something out of his will so Raila agreed to initiating it. The BBI wasn't Agwambo's scheme since it was to reduce presidential powers something I believe wasn't to favour a Raila Presidency.

The ODM boss as an old serving politician knew in advance that the BBI was perpetuated illegally and that's why the High court failed it. Remember that the former Premier was involved in inventing the 2010 Constitution of Kenya and he is to take the full responsibility.

What happens when a German company builds a BMW and it develops a serious mechanical problem then the said company carries all the responsibility.