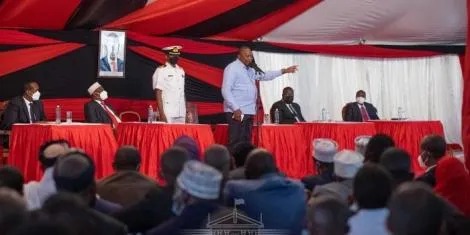 Soy Member of Parliament, Caleb Kositany, has detailed how President Uhuru Kenyatta once directed Jubilee Party lawmakers to leave their phones and watches in their cars during an impromptu meeting at State House, Nairobi.

Speaking during an interview on NTV on Tuesday, May 10, Kositany disclosed that Uhuru had convened a meeting after being declared the 2017 presidential election winner. The details of the meeting were sent to the Jubilee members through text messages overnight.

He further stated that they were forced to leave their personal belonging outside the venue even as they waited for the Head of State to address them.

Kositany expressed that the majority of them were shocked after the President dared them to walk out on him even as he gave instructions on how he would run the government in his second and final term.

"Before we were sworn-in in 2017 after the elections, we had a parliamentary group (PG) meeting which was more of a monologue. First, we were told to leave our watches and phones in the vehicles and ensure that we were at State House by 8am. We were there by 7:30am and we had breakfast.

"We waited for two hours and after prayers, he read a riot act for 25 minutes," he explained.

The Deputy President William Ruto ally added that Uhuru called them for a second meeting days later and asked them to help him drum up support for his candidature after the Supreme Court nullified his win.

He stated that most of them were worried about Uhuru's relationship with Ruto as the two leaders seemed distant, asserting that it was the beginning of the collapse of the Jubilee Party.

"I remember a remark that President Uhuru made. He stated that if we do not agree with his policies, then the gate of the State House was open. We left State House in a hurry.

"A few days later after his win was nullified, the same gates that were opened for us to get out were now opened for us to come in again. That is the moment we knew that things were not the same," added the Soy MP.

However, Jubilee Vice chairperson, David Murathe, dismissed the analogy that Uhuru sidelined his deputy after the meeting, stating that Ruto was given a critical role to play during Uhuru's second term.

"Kositany is very economical with the truth. They were told that the President was very busy with his agenda of running the country. Everybody who has an issue was directed to see the Deputy President," stated Murathe.