By Ukambanibreakingnews (self media writer) | 4 months ago

Natembeya is vying for the gubernatorial seat on a DAP-K party ticket. Defense cabinet secretary Eugene Wamalwa hails from the county is fully behind Natembeya's candidature and his political influence is a huge win to him.

Today the DAP-K gubernatorial candidate received a major boost after UDA gubernatorial aspirant and his entire team joined his camp.

Natembeya received Philemon Samoei who was the Transnzoia UDA gubernatorial aspirant to his DAP-K camp under Azimio La Umoja movement.

The UDA gubernatorial aspirant was accompanied by several UDA party aspirants and leaders from the county. They included; Julia Kichwen who was the UDa deputy governor candidate and Teresiah Metto. 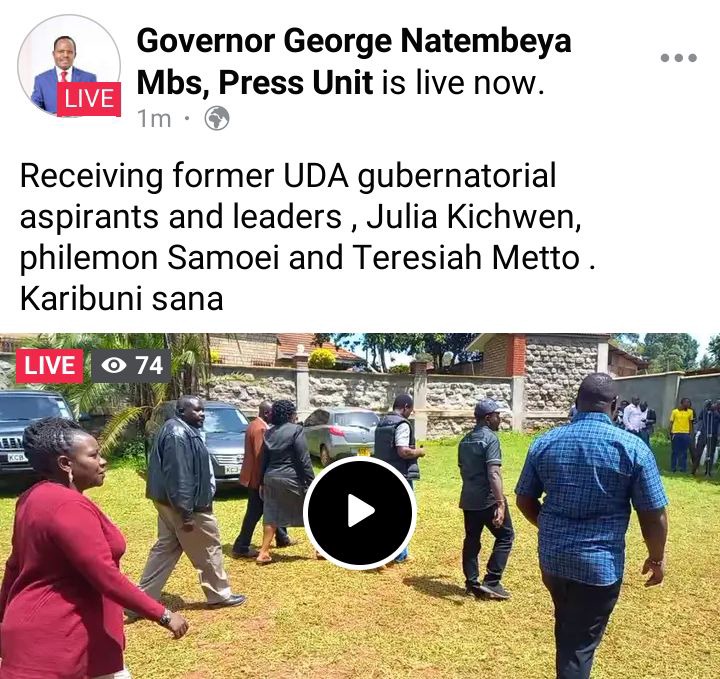 Natembeya and his deputy governor candidate Philomena Bineah have embarked on a series of grassroot campaigns to woo Transnzoia residents to support their joint gubernatorial candidature on a DAP-K party ticket.

Kenya Kwanza alliance has fronted FORD Kenya party candidate Chris Wamalwa as their candidate in the race. The two- term Kimimili legislator will face off with George Natembeya of DAP-K party in the August polls.

The incumbent governor Patrick Khaemba is yet to endorse his successor. Governor Khaemba recently joined Kenya Kwanza and may support Chris Wamalwa candidature because he is the alliance candidate in the race.

Below is George Natembeya speech as he welcomes the UDA team.

History: Special Triputes The Only Surviving Member Of The Earliest Kenya's Cabinet

One Party? What President Ruto and Moses Kuria Allegedly Intend To Do

Gov. Wanga Issues Statement Over Ruto’s Tour Of Homabay, Reveals Why She Won't Join His Function.