Why Citizen TV Deleted This Video Of Raphael Tuju After An Interview. Check What He Said (Video)

By TrendNews (self media writer) | 6 months ago

Citizen TV has been on the spotlight after they deleted a video from an interview carried out by Jeff Koinange with Raphael Tuju. In the interview, Tuju said that deputy president William Ruto had been paid to support President Uhuru back in 2013. He then said that the deputy president became controlling and started blackmailing the president by asking for large suns of money. Tuju said that he decided to open up about the matter because Kenya's need to know the truth as they head to the general elections. 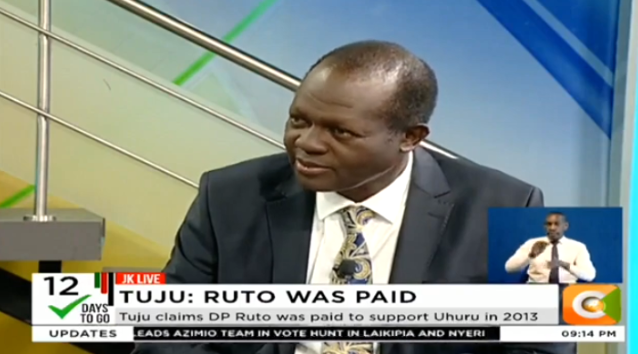 "The question that everyone could be asking now, the obvious question is why come out now and tell us this?" Jeff Koinange asked Tuju.

"It is 12 days to the elections and Kenyans need to know the truth." Tuju responded. "And once again the truth is William Ruto was paid to support Uhuru Kenyatta?" Koinange insisted to be sure that Tuju was telling the truth.

This was a very big allegation against the deputy president and Tuju confirmed that he was sincere with what he was saying. Citizen TV posted the interview in their social media pages but deleted it a few minutes later as it was very sensitive. Unluckily for them, some quick social media users had downloaded the video which is now trending.

The media house feared that the post could create an endless discussion and even create a negative impression if it was discovered that all that Tuju was saying was a lie. Watch the video shared below. Follow and subscribe for more news updates daily.