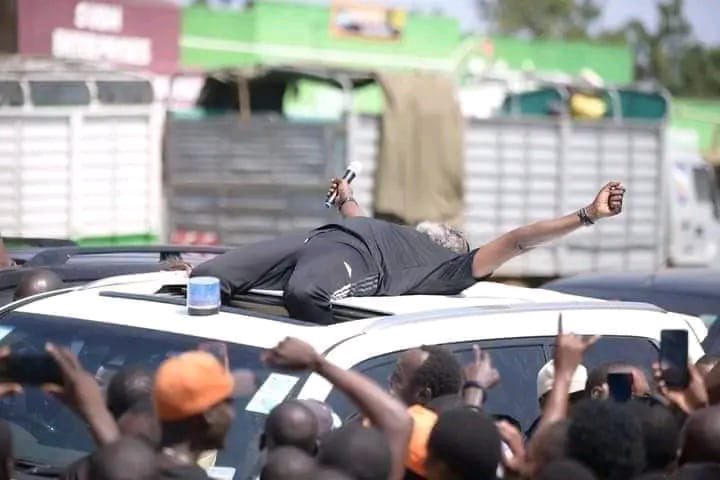 Roots Party of Kenya presidential candidate George Wajackoyah was this morning hosted by Mark Masai on NTV's AM Live where he expounded on his ambitions to be the fifth president of Kenya.

Wajackoyah responded to claims that he is Prime Minister Raila Odinga's project after he directly told voters in Kondele, Kisumu County to either vote for him or vote for Raila Odinga noting that a win for either of them will be a win for the Western region.

Wajackoyah refuted the claims telling Kenyans that he was in an enemy territory and had to be tactical and show support for the Nyanza kingpin lest he be treated the same way the DP was when he went there late last year.

He also said that when he was sleeping on the car, he was having a spiritual conversation with the Azimio La Umoja One Kenya coalition presidential candidate who ultimately gave him his blessings to seek the presidency.

"Is it true Raila sent you?" He was asked.

"Let me tell you this, I was in Raila's backyard. People have been stoned there. And when you saw me sleeping on the car, I was dreaming and in my dream I was talking to Raila. I was asking him, 'do you want me to die in Kisumu?' I also asked him, 'I am in your political backyard, what do I do?' He told me that he was pushing me to be president," he responded.

The Total Votes Mudavadi And Wetangula Delivered For Ruto

William Ruto Finally Arrives at Bomas of Kenya in Style

How DP Ruto Made Grand Entry to Bomas of Kenya, Raila & Karua Yet To Arrive- VIDEO

"We Are Celebrating Butterflies" ODM Senator Tells Chebukati, Urges Him To Do This

Kiraitu Murungi Gets A New Job After Losing Elections.