By Abonyo (self meida writer) | 1 months 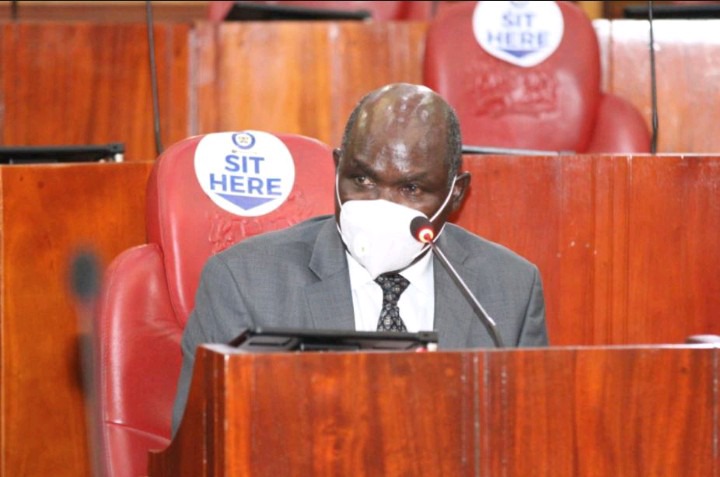 IEBC Chairman Wafula Chebukati when he appeared before the Justice and Legal Affairs Committee on Constitution of Kenya (Amendment) Bill 2020. March 17 2021.

The Chairman of Independent Electoral Board of Boundaries, Wafula Chebukati appeared before the Justice and Legal Affairs Committee on Wednesday 17th.

He was speaking to the Justice and Legal Affairs Committee on matters of the Constitution of Kenya (Amendment) Bill (2010).

In terms of BBI promoter, the Bill made an addition of 70 more constituencies that had already been allocated to 28 counties across the nation, with Uhuru’s backyard leaving the table with the lion’s share.

Wafula Chebukati said that the issue of boundary allocation of boundaries was under the jurisdiction of IEBC and is outlined in Articles 84 (4C) and 89 of the constitution.

Rift Valley, Nairobi, Central and Coast are amongst the large beneficiaries of the proposed Amendment Bill, 2020, which proposes to increase the number of constituencies from 290 to 360. 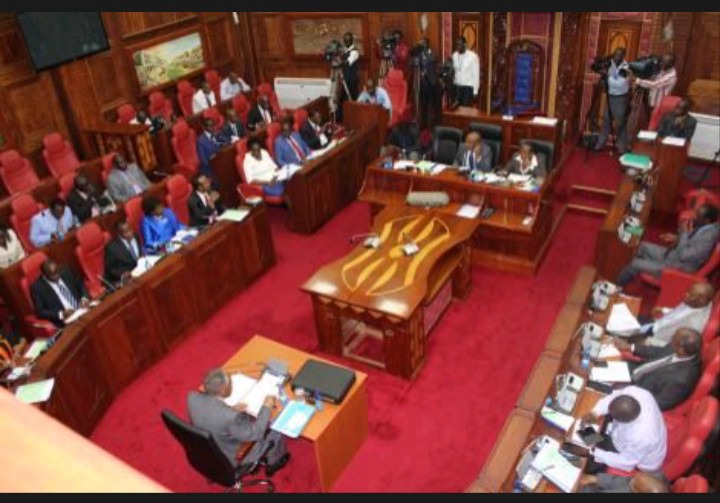 An image of Senate Committee in Parliament during a past proceeding.

In a statement made by Chebukati, he lashed out at the move by BBI promoters by allocating and distributing the boundaries saying that the task of allocating additional constituencies that will be is the work of the IEBC and not politicians.

The promoters of Bill reiterated that they used population to decide the counties eligible to get the additional constituencies with a major priority to the underrepresented areas given in the National Assembly.

The mandate of the IEBC is to review the electoral areas after between 8-12 months. According to its policies any review should be completed at least 12 months before the major elections are held

The IEBC Chainman also quoted the conflict between IEBC and Kenya National Bureau of Statistics that has frustrated the tabulation of electoral population data barely 16 months to the 2022 General Elections.

The Bill indicates that the larger Rift Valley will get 23 new constituencies, Nairobi 12, Central Kenya 11 and Coast 10. 6 constituencies were allocated to Kiambu ,Nakuru 5, Kilifi 4 while Ausin Gishu, Narok, Kajiado, Mombasa, Kwale and Bungoma would be settled at 3 just to mention but a few.

It has been established that the President’s team is planning to only have popular issues in the BBI be pushed forward for plebiscite, despite both Uhuru and Raila maintaining ground that BBI would either be passed or rejected as a whole.

This new development has shown that the president and his team are working on a plan to isolate issues that do not need a referendum and sign them into law and also have other proposals considered unpopular go to a public vote.

The deep-seated political interest by one side of the agreement has triggered distrust and a sense of treachery and mischief among the allies of the President and those of his handshake partner Raila Odinga which was the initial building blocks of the peace pact formed in 2018 as a man to man agreement.

According to an advocate at the Kenyan High Court, Lawyer Waiganjo, the Bill already contained enough goodies to the MCA’s, having them appointed to the county cabinets and the constitutionalization of the Ward Development Fund. Therefore this would enable the County Assemblies to quickly popularize the Bill.

“There are about 75 amendments, if you take 75 and you see there is one or two that are even doubtful if they require a referendum, do we still go and spend ksh 20 billion to put the country on an expensive and divisive political process?” Asked Kamotho Waiganjo, a close confidant of Uhuru and Waiguru.

Lawyer Ahmednasir Abdullahi echoed Waiganjo’s sentiments that the BBI does not need a referendum to pass.

The current BBI report contains 12 proposals set aside for plebiscite and they are as follows; prompt contract payment, public finance, bills on SMEs ethics and integrity, management of elections, anti-corruption, harambees and charity contributions, devolution laws, public participation, establishment of a national economic and social council and health.

Considering the current development the Bill can actually go from passage in the Parliament to the assent of the president and then become a part of the law.

This is because of a number of reasons that I have looked at. The Bill would need a referendum if it is rejected by more than half of the members of both Houses. The impossibility of this is impeccable since if the government manages to get an approved more than a thousand MCAs, then picking three hundred odd members MPs will be a walk in the park.

Secondly, the Bill would be required to go for referendum if it contained any of the ten protected provisions set out in Article 255.

This is the chance the President is picking, by resorting to isolate parts of the bill, and it is agreeable unless one wants to argue that removal of Cabinet approval provisions affects the function of Parliament or that the appointment of the ombudsman of the Judiciary offends the judicial independence.

These are only debatable points and the promoters of the BBI would only risk to take the Bill if only the Courts decree. Which a step they are not willing to take because the lawyers in our courts are not people to trust. To them truth is relative, they cannot take the BBI and leave it as it is. Mark Twain once said that interpreters of law can always be depended on to take a reasonably good law and interpret a common sense out of it and make it inoperative.

The Hustler narrative formed by the anti-establishment brigade has formed a reasonable political cloud across the social spectrum in our country.

Unnaturally, the anti-establishment divide led by an establishment king, Deputy President William Ruto has been in Parliament for decades.

Being aware of these political hurdles the BBI movers would never run the risk of a contested referendum in which they may lose or win but leave grievously wounded.

A serious financial consideration has also to be made. There would be no reason to spend an extra Ksh 15 billion on a politically expensive referendum with uncertainty of the results and whose constitutional certainty is at best contested.

Ofourse the dangers of avoiding a referendum is looming since the BBI mover had promised a referendum and a betrayal of this promise may have political backlashes in the 2022 election. Kenyans also took part in the formation of the 2010 constitution and they would stand firmly with legal claim if they are denied a say.