Kenyan-turned Canadian Controversial Lawyer Miguna Miguna has made a shocking revelation that he had been invited to grace the newly launched Royal Media Services Television station Ramogi television for antes interview but he flatly turned the deal down.

Miguna took to his social media pages and stated that "They have invited me to appear on their Ramogi Television instead of Citizen television Kenya. I have said NO." 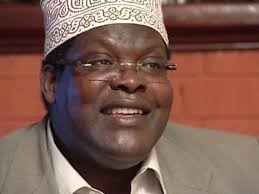 Miguna further alleged that the media had reported on non existent government orders so as to subvert his personal rights. This reaction follow the latest orders by the interior ministry under the Cabinet Secretary Mr. Fred Matiang'i who lately gave the green light for processing of Miguna's travel documents together with the solicitor general Mr. Kennedy Ogeto who also gave consent to the matter.

Miguna has however rubbished those claims saying that they are not true and the real intention is to trap him. He claims that the orders are non existent and he will not be tricked.