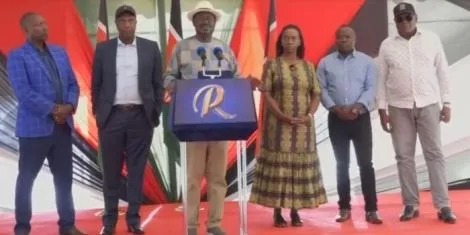 Kenya Unity Party (KUP) has distanced itself from the Azimio rally set to Launch on Wednesday, December 7. KUP party leader Prof. John Lonyang'apuo told the media on December 6 that no discussions were held before the planned mass action.

Lonyang'apuo said, "The Kenya Union Party has unanimously withdrawn from the demonstration planned by the ODM party."

He said there were better ways to air grievances, canceling the advisory meeting called by the former prime minister.

Lonyang'apuo boldly declared: "Today we come forward to hold a coalition together and show the way forward for Kenyans to see the fraudulent nature of the current agreement."

Odinga asked his supporters to gather at Kamukunji Square in Nairobi on December 7 and 12, 2022 to make progress on how to preserve President William Ruto's government.

Azimio leaders called the meeting a consultative meeting to discuss the state of the nation.

The call was made to challenge the position of the four IEBC commissioners who defected from the presidential results announced in August 2022 by Chief Wafula Chebukati.

The marches in the country started from Kamukunji grounds before moving to Mombasa, Nakuru and Kakamega counties.

Lonyang'apuo's bold move came after people from various political persuasions in the opposition coalition developed cold feet at the rally.

For example, Wiper Party leader Kalonzo Musyoka announced on Tuesday, December 6 that he will join his partner Azimio in the planned meeting, contrary to the comments of party chairman Chirau Ali Mwakwere that he has withdrawn his political affiliation from the event.

However, a press conference in Nairobi by Kalonzo Odinga and Martha Karua announced that the protests are still ongoing.