By TheDailyOnlinePunch (self media writer) | 29 days ago 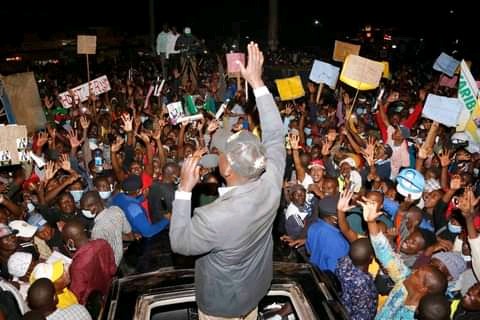 The race to succeed the incumbent president Uhuru Muigai Kenyatta bagan immediately Orange Democratic party leader burried the hatchet and agreed to work with the president. Their coming together badly damaged the president's relationship with his deputy who immediately bagan campaigning when it became clear that the president would not back him up in his 2022 presidential bid.

Ruto began campaigns earlier than Raila who is yet to officially announce his presidential bid. He had communicated earlier that he will declare his bid once the Independent Electoral and Boundaries Commission closes the voter registration window.

Speaking today at Eastleigh in Nairobi City county in a mega rally, Raila laughed off DP's early campaigns stating that starting early does not mean that one will win a race. " Kutangulia Sio Kufika, Mimi ndio naanza Sasa," Raila told the crowd.

Confident Raila warned that his supporters are now armed ready to sell his ideas and manifestos throughout the country. Raila is confident that the campaigns he launched last month in Nyanza and the those that are yet to come will go a long way in countering DP Ruto's influence on ground.

Ruto on his part is tireless, he campaigns until late in the evening. Last week, he held a late evening rally at Kirigiti, Kiambu. Today, he held another late evening 7:00 PM rally at Limuru.