By Thee_Chosen (self media writer) | 3 months ago

Raila is on the headlines on the Taifa Leo Newspaper days after he came out as the leader of opposition to advocate for Kenyans well being in the Kenya Kwanza government. Raila in the past two days been socializing with citizens around Nairobi. He was invited to attended the Bunge la Mwananchi meeting in Jacaranda. He (Raila) has also visited Mathare where he bought fuel for bodaboda riders.

This move by Azimio-ONE Kenya Alliance presidential candidate is seen as a plan to offer strong opposition to Kenya Kwanza government and a strategy to revive himself since he failed in the just concluded general election. 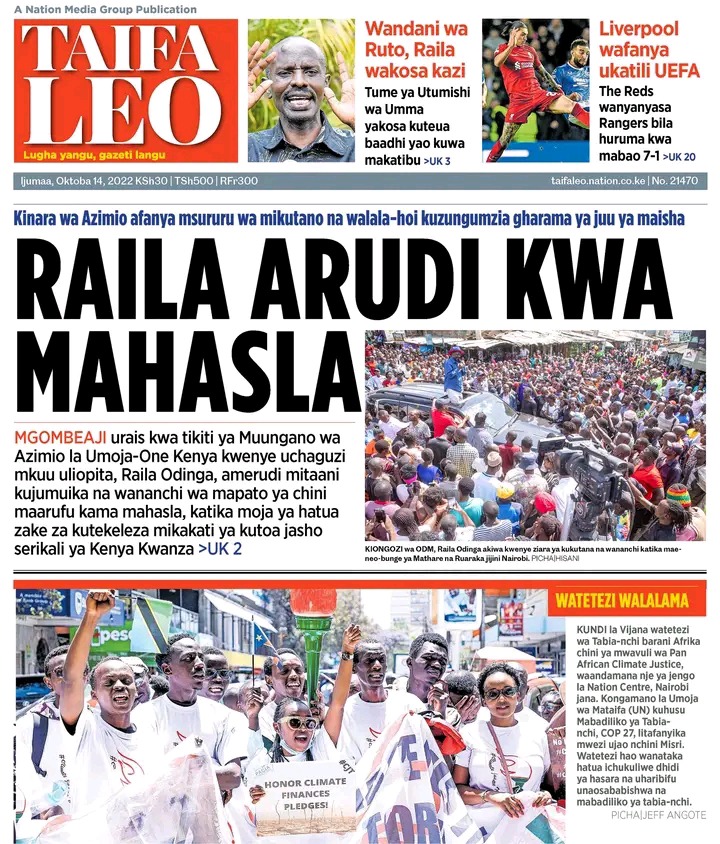 In sports, Liverpool shocked fans after they won against Rangers in the Champion's League on 7-1 win. Goals from Roberto Firmino and Salah ensured that Liverpool had chances of going to the round of 16. Fellow Countrymen Tottenham Hotspurs had a narrow win against Frankfurt with a 3-2 win in a mouthwatering match. Grab your copy of the Taifa Leo Newspaper to get updated.

Content created and supplied by: Thee_Chosen (via Opera News )