Being Political season, we espect funny and many dramas to happen in this country. The news that have hit the headline today is about six people who have been arrested for heckling and pelting stones at Azimio La Umoja One Kenya Coalition party running mate, Martha Wangari Karua, during her tour of Kirinyaga county last week. 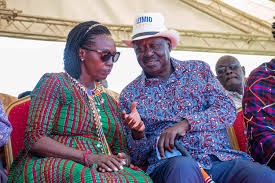 Mr Karua, who visited Kirinyaga last week upon being named Raila Odinga's running mate, met a hostile group of youths who attempted to disrupt her meeting. The Interior Principal Secretary, Karanja Kibicho, issued a stern warning last week to those disrupting meetings of persons they do not support in the August 9 polls. He went a head to urge Security forces to cooperate with government administrators to crack down the hecklers and those intending to cause chaos in political rallies.

Kibicho had directed the Kirinyaga county commissioner to get rid of the hooligans, as he condemned governor Anne Waiguru and MCA James Murango of hiring goons to heckle Azimio La Umoja running mate, Martha Karua, during her campaigns in the area.

In response to Kibicho's directives, Kirinyaga Central Deputy County Commissioner, Daniel Ndege, gave out a of stern warning against anyone found causing chaos during this period of politics. He cautioned politicians against using the youths to cause chaos noting that the government will not tolerate incitement during this campaign season.