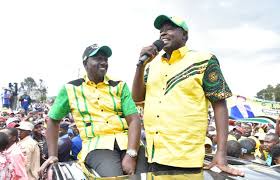 Kenya Kwanza coalition is facing a great rift after politicians from Central Region threatened to ditch the coalition over discrimination claims.

This is after Deputy President William Ruto and his running mate Mathira MP Rigathi Gachagua visited the vast region leaving some leaders from affiliated parties feeling abandon after they were rejected openly by their party leaders.

The affected politicians are alleged to have convened a meeting tomorrow where they are expected to discuss their way forward with quieting the coalition being on consideration.

Affected politicians who comes from Chama Cha Kazi by Gatundu South Moses Kuria and The Service Party of Kenya, by Mwangi Kiunjuri claimed that they were humiliated and frustrated after they were denied to address DP Ruto's supporters during his recent visit in the region.

During the DP's tour, the biggest casualty in Nyandarua was Speaker Wahome Ndegwa who is contesting to unseat Governor Francis Kimemia.

It is alleged that Moses Kuria publicly refused to allow Wahome to address the rally and openly called upon residents of Nyandarua to vote for the UDA candidate after an earlier fall-out that had to be settled in a court. Wahome is said to have taken CCM to court after Moses Kuria decided to cancel his ticket in favor of the UDA candidate but was reinstated to vie.

Mr. Kirika who openly lashed out at DP Ruto during the Nyandarua tour said that campaigning for UDA candidates was a clear indication that the party does not recognize candidates from other coalition parties.

He further went ahead to say that endorsement of the preferred candidate was dangerous and detrimental to other candidates.