"I'm Not In The Trans Nzoia Gubernatorial Race" CS Wamalwa Says, Reveals The Person He Will Support 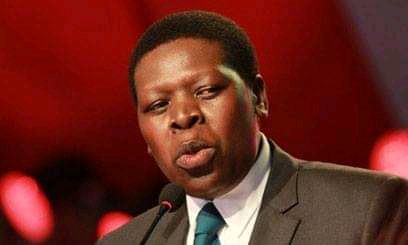 Devolution cabinet secretary Eugene Wamalwa(above), has quit the race to succeed governor Patrick Khaemba. This comes after months of speculations that the powerful CS would be in the race in 2022. The close supporter of President Uhuru Kenyatta has instead vowed to support Rift Valley regional police Commissioner George Natembeya.

The CS who reportedly launched own party a few weeks ago has instead revealed that his main aim will be to focus on delivering the presidency to the Luyha nation, he promised to ensure that the region becomes part of the next government. The CS has been leaning towards former prime minister Raila Odinga's side, he has attended his several functions a clear indication that he could support his candidacy.

The race to succeed Khaemba who was elected on the Ford Kenya ticket now will be between Kiminini Member of parliament Chris Wamalwa and Natembeya, the member of parliament will likely vie on FORD Kenya party ticket, however, Natembeya is yet to declare his party of choice. 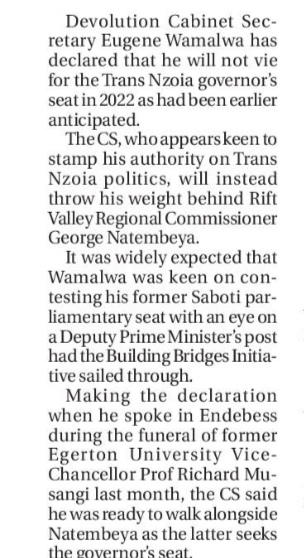 Screenshot of an article by a local publication, People daily.