By Weakleaks! (self media writer) | 1 year ago 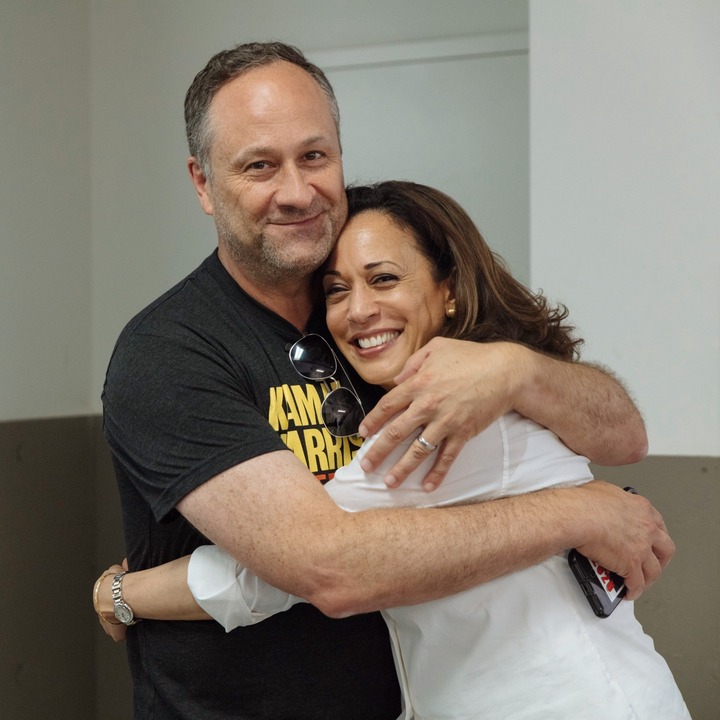 Vice President Kamala Harris and her husband Doug Emhoff in a past encounter (Picture from online images, USA Today).

Besides the common question, 'What's in a name?', is now it's parallel: What's in a title? Definitely, there is something more than meets the eye in this case.

The United States of America just elected to the office of the vice president a woman for the first time in their history on November 3, 2020, and swore her in on January 20, 2021.

That means the nation, and the world for that matter, had not prepared for -- or got used to -- the title and position of the husband to a 'Mrs. Vice President' the American style. Or could it be 'Madam Vice President' the African way? That is not yet the confusion being reported here.

Immediately after the administering of the oath of office on Kamala Devi Harris as deputy to the most powerful man in the world, Joseph R. Biden Jr., there is a man beside her.

His name is Douglas Emhoff. And while the world was gambling on his right title, Kamala Harris's husband cleared the air by introducing himself with this tweet pinned to the top of his Twitter handle.

"I am honored to be the first male spouse of an American President or Vice President. But I'll always remember generations of women have served in this role before me—often without much accolade or acknowledgment. It’s their legacy of progress I will build on as Second Gentleman." 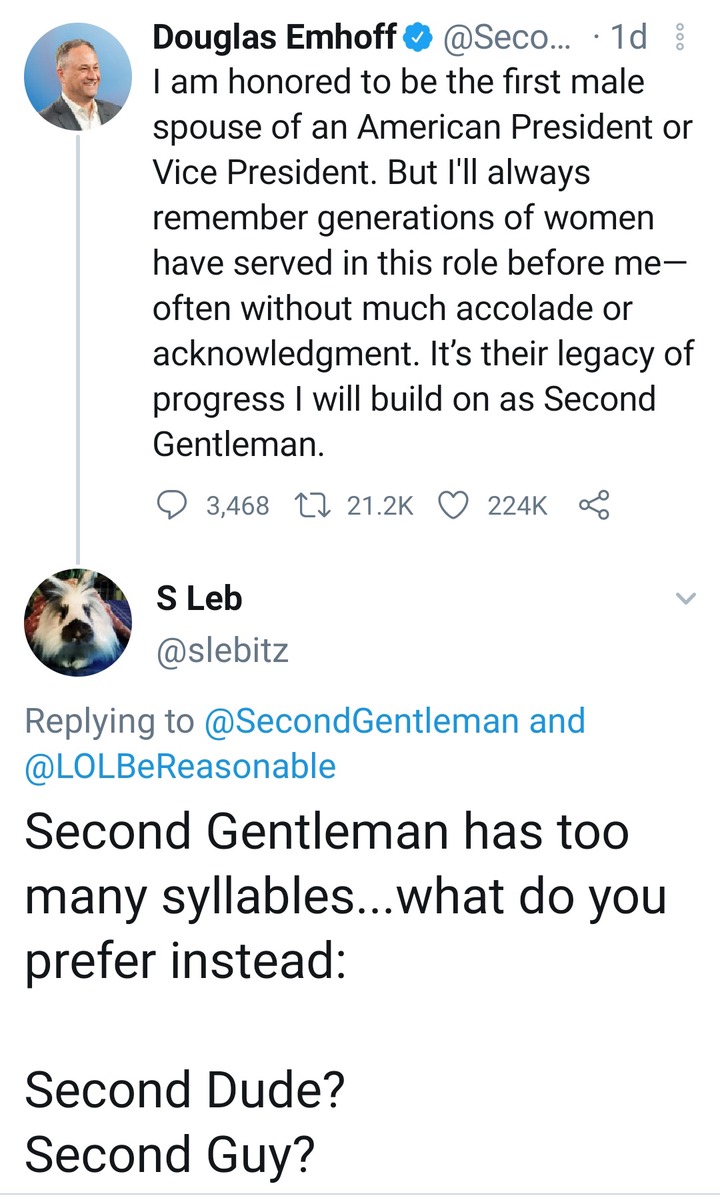 As Mr. Second Gentleman tried to inform the public, he drove them into more confusion with this clause: "...first male spouse of an 'American President or Vice President'." Meaning what? This will be discussed in a separate analytical post (follow us on Weakleaks here for more ..).

Then the sigh of relief followed suit, but not without some cynical and comical reactions from his brand new fans, or followers.

"This morning, my son asked, “What are they calling Kamala’s husband?” (Like he’s BFFs with her, lol). When I told him he said, “that’s cool. I could do that.” And that’s really how simple it is. Good luck. I hope you'll make us all proud." Tweeted ThatKindOfMom @AMBSINY. Then more others as screenshot in a sample here.

As if that is not enough, there arose the confusion in the description of this new title as "the First Second Gentleman" of the United States. Many readers did not grasp the meaning of that reference from many writers in the the Media, including on Social Media.

One tweeter asked if the description of 'first' is made to echo his pinned tweet in which he refers to himself as 'first male spouse of an American President or Vice President'. This can be best explained by none other than Mr. Emhoff himself. 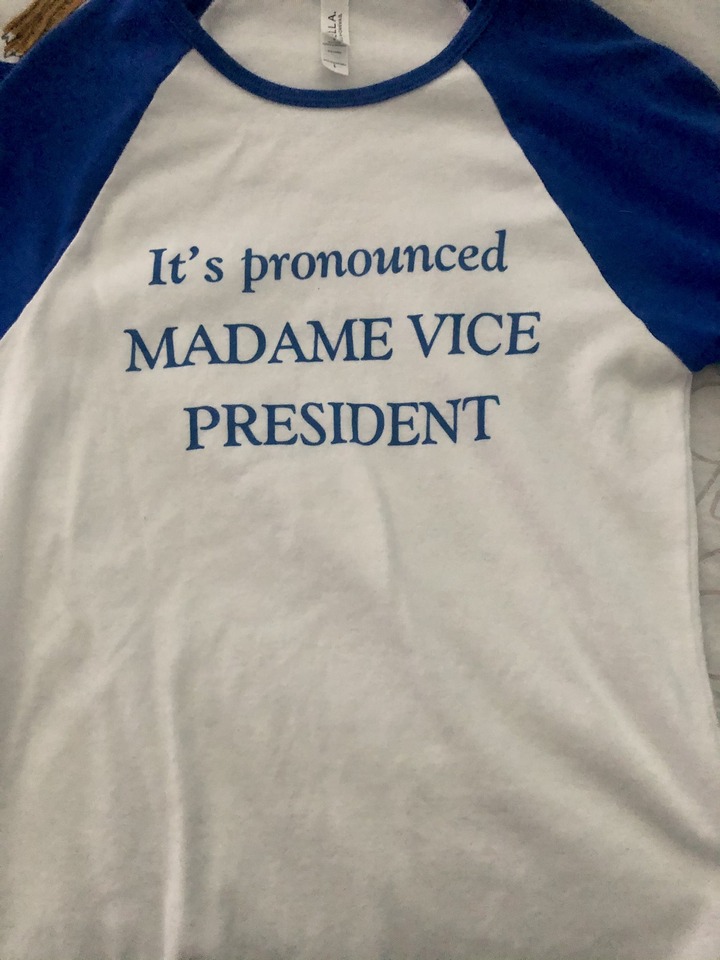 And the fans and followers react on Twitter with such pictures.

Then now arose the reason behind the second couple not sharing a surname. Douglas Harris or Kamala Emhoff? Still, the couple owe the world that explanation, probably in the ongoing Media scrutiny or in their autobiographies later.

Yet again, as if that is not enough, here comes the confusion in the correct pronunciation of VP Kamala Harris's name. Justice Sotomayor, while administering the oath, pronounced the hitherto Vice President-elect's name of 'Kamala' as 'Komla', and the Media went berserk over that.

Among the respondents to this confusion is CNN's Jake Rapper making a thinly veiled ridicule but without mentioning the error by the Judge directly, suggesting VP Kamala Harris should pronounce her name 'incorrectly', meaning different from that of Justice Sotomayor and others.

Meanwhile, watch this space for more exposés on such blunders by the people who ca themselves la crème of the world. 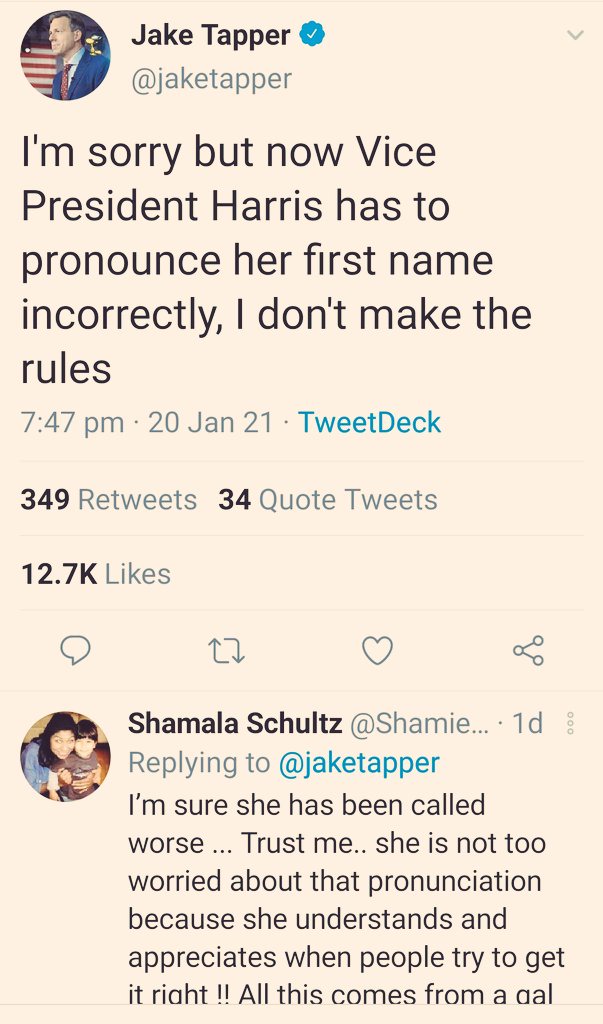 A tweet from the CNN host, Jake Tapper and his fan on the mispronunciation of the new Vice President's name.

Content created and supplied by: Weakleaks! (via Opera News )