Why Politics is Power and Money in Kenya 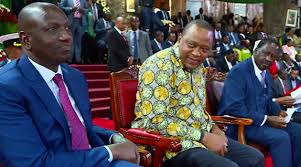 Political analysts suggests that for every political campaign, winners have in most cases rich and being supported by incumbent leaders. In Kenya, national politics greatly affects county and other lower levels campaigns in the country.

Let's have a look at these categories; power and money. Beginning from the national level politics; it's either you belong or align yourself or party to 3 major royal families; the Kenyatta family, Moi family or Odinga family. This has been found hard by the "hustler nation" to clinch to power--- those who lack power and money.

The said category is, by under waters behind by the wealthy billionaires like Jimmy Wanjiki among others. The latter business merchant has been at the back of super sponsorship to NASA against President Kenyatta's Jubilee Party in 2013 and 2017 general elections. They, the billionaires, specifically those giving an upper hand to the government of the day  are hidden by the "deep state

"The deep state" controls everything in the government, but hardly would citizens notice this. They never appear in any political rally.

In Kenya, the deep state comprising sections of the royal family; Kenyatta, Moi and Odinga determine the waves of the current "Handshake" deal, they have money and power hence can maneuver a larger population.

The "Hustler nation" in Kenya is controlled by the Tanga Tanga team which is believed to be controlled by the Deputy president, Dr. William Ruto totally against the "system". Ahead the 2022 succession politics, the movement was formed as a rebel against what citizens termed it " dynasty" which has since independence controlled politics, money and power. This is why, Kenyans see that by bringing in new blood would change the politics and leadership of the country. They want Dr.Ruto as the country's next boss.

Dr.Ruto, despite being a son of a peasant farmer of Sugoi seems a threat to the "system" and the dynasty has money and using the power of the presidency. This has therefore, provoked sleepless nights to the Royal families of Kenyatta's, Moi's and Odinga's. Many question where and how DP Ruto acquired all his wealth which has since 2018 made a great impact on political temperatures due to large donations he made on churches.

With the combination of money and power, 2022 election is almost determined. However, the "deep state" is working day and night to ensure that Ruto would not clinch to power. Hearsays have it that, if Kenyatta family has to return his hand to the Kalenjin people, he has to start with Moi family. This shall however greatly defer with the wish of the kalenjin nation as almost 90% opt for and support DP Ruto as the next President of Kenya.

"I Have No Apologies To Make, We Must Move On" Lawyer Says as He Declares Full Support For Ruto.

Ayub Savula: I will be on KTN, Monday 3rd to Discuss how to Navigate Kakamega and National Politics

News Just In; Former Meru Governor Retires From Politics After He Lost On The Last General Election