Lusaka who was the first Bungoma governor will be contesting for the post once again in the August elections, and he is yet to reveal his political party.

Addressing the residents, Malala dismissed the current governor Wycliffe Wangamati arguing that he is behind increased cost of living in Bungoma, hinting that Lusaka might be going ANC to contest for the top county seat.

"I want to bring you greetings from one person, that is Kenneth Lusaka," said Malala attrcting cheers from the residents.

Malala further argued that Raila Odinga had offered a number of Western Region leaders at least Sh 20million to ditch ANC and join Azimio La Umoja, noting that leaders supporting Mudavadi will follow him wherever he goes.

The vocal senator also launched an attack to Wafula Wamunyinyi over the formation of the Democratic Action party of Kenya. 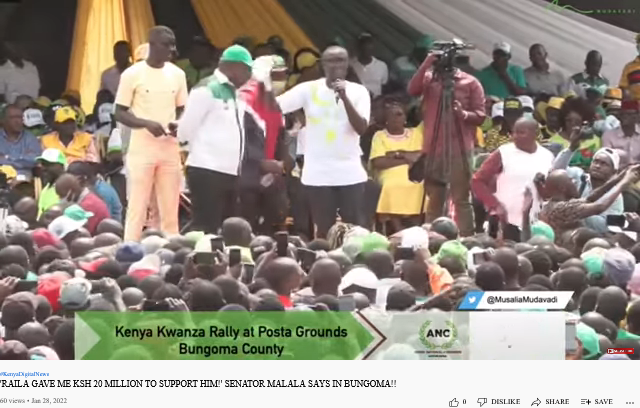 Cheers as Gachagua, Kabogo and Murkomen arrive in Eldoret for the county economic forum