The Deputy President on 11th August 2020 released a video on his twitter account in which he was saying that he is not afraid of the Deep State and the System. The alleged Deep State and System are reportedly not leaning towards the probability of a Ruto Presidency in 2022 and will do anything to stop him. HE Ruto therefore released a statement that he was not afraid of them and he will win with the help of the people and God and that the Deep State will not manage to rig him out. His statement came after Jubilee Vice Chairman David Murathe stated that the Jubilee party will support Raila Odinga for presidency in 2022. This was also seconded by COTU leader Francis Atwoli.

Blogger Dennis Ole Itumbi who was once Statehouse director for digital communications has ever been the biggest defender and propagator of the ideologies of the Deputy President. When William Ruto was in good terms with HE Uhuru Kenyatta, Itumbi used to rubbish off any sort of libels against the government. As they say, the internet doesn't forget. A Kenyan by the name Mwarimu Mutemi Wa Kiama on twitter has released a Facebook post of Ole Itumbi from the past in which he rubbishes the existence of the Deep State. 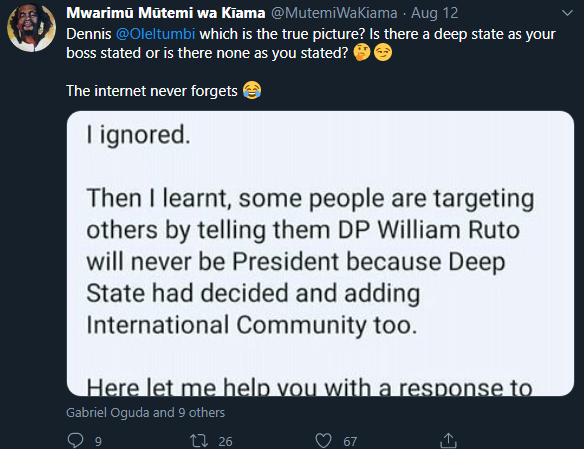 It seems that people only take positions that suit them and when it doesn't, they complain about it. In his own words, 'The Deep State is a myth'. Now it seems to be real when they are going against it. Dennis Ole Itumbi went ahead to make a reply to the post. He stated that the statement was only released in half and released what is said to the rest of the Facebook post. In his counter, he claims that even the DP posed his Deep State statement as a question and not a definitive statement. In essence, he is not accepting that the Deep State exists which would invalidate his earlier post but is not denying its existence because it would go against the position of his boss. 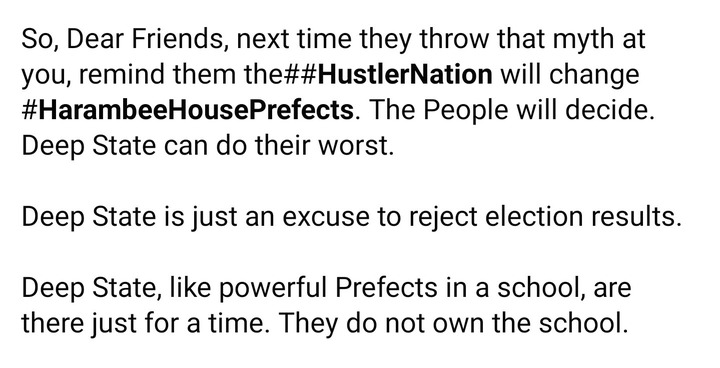