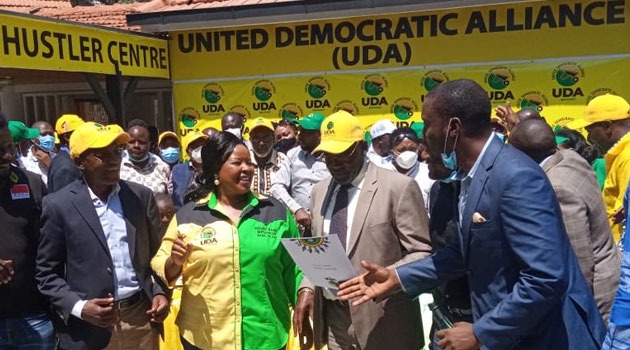 The newly formed United Democratic Alliance has found its first hurdle. The party was launched at two UDA centre in Nairobi and it unveiled its candidates for the various by elections to be held soon across the country

The new political outfit ,however has received its first unity test after a leaked WhatsApp conversation from a splinter group called 'UDA-KALENJIN CHAPTER'

The group consists of the UDA Kalenjin leaders.

In the leaked chats,the leaders do notvtdust anybody in the party especially their Kikuyu colleagues. They show their hatred toward them but have to persevere to get the price.

They also are not sure of their party chairperson Johnstone Muthama and Mwaura. In fact the conversation hints that Muthaura is only a broke guy who needs money to pledge his loyalty to them.

The DP also asks about 'ule MTU mzungu was Ruiru' referring to Mwaura with whom his lieutenants say that one is under control.

Gladys Boss Shollei ,however,warns them against Kikuyu's saying she has worked with them and can never be trusted.

Vocal MP Mpuru Aburi Thanks Ruto Over an Important Move