By @PAULO_HustlerTV (self media writer) | 13 days ago 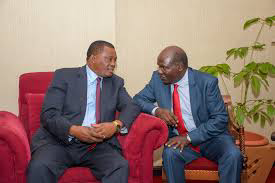 Mr Chebukati together with commissioners Boya Molu and Abdi Guliye have officially leave the office as commissioners having served for a six-year non-renewable term. However Taxpayers will pay the outgoing chairman of the Independent Electoral and Boundaries Commission (IEBC) Wafula Chebukati and two commissioners a cumulative amount of Sh32.7 million as their send-off package.

Shared through Kenyans.co.ke, the Attorney general has assured Wafula Chebukati that he will not retire as he alleges that president William Ruto's government will find him something to do even as his time as IEBC chairman elapsed. Muturi has also applauded the chairman for standing for truth in the just concluded august 2022 election by respecting the will of kenyans. "Mr Wafula Chebukati you are not retiring. I hope this country and William Ruto's administration should find some other place for you to Continue leading this country with that kind of resolve" Attorney general Justin Muturi

Chebukati has been crowned a hero after withstanding all the state threats to announced Raila Odinga the winner. This also come after he revealed before his exit that Former DCI Boss George Kinoti wanted to kidnapped him so that his vice chair Juliana Cherera announce Azimio la Umoja One Kenya presidential candidate Raila Odinga the winner. Do you think President William Ruto's administration should find a job for Chebukati after his exit in IEBC as the chairman? Feel free to share your views and thoughts in the comment section below 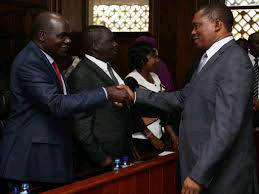