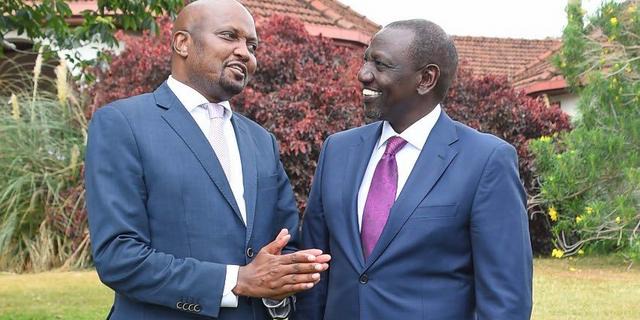 A day after Chama Cha Kazi party leader Moses Kuria hinted that he will be dissolving his party in favour of President William Ruto's United Democratic Alliance (UDA), the party has requested its members to give views on the same.

According to the Nation, the party's Executive Director Philip Muchiri, chairman James Kogi and the secretary general James Nage in a signed notice, have requested their members to submit their opinins within the next three weeks, on whether they approve the merger or not.

Should the members support the merger between CCK and UDA, the party will file a notice with the Registrar of Political Parties Ms Anne Nderitu, who will then initiative the move, meaning CCK will lose its individual identity.

As quoted by the Nation, Nderitu says that once her office receives the request, she will gazette the dissolution of the party within seven days, and that will results to the removal of the Chama Cha Kazi's logo, symbols, colours, slogan and other particulars associated with the party from the political parties register.

Nderitu will also be mandated to transfer the rights, obligations, assets and records of the CCK party to UDA including entitlement to the Political Parties Fund. 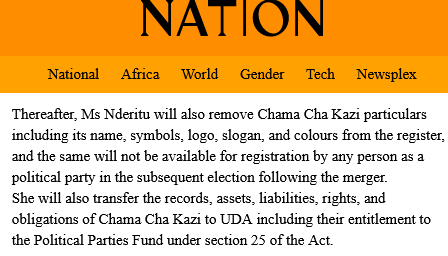 This comes after Ruto unveiled a list of his cabinet secretaries, and who according to the Constitution, must not hold any political party's position after being appointed to be state officers.

Kuria was nominated as the Trade, Investment and Industry CS, with others expected to relinquish their positions in their parties being Musalia Mudavadi (ANC), Justin Muturi (Democratic Party), Alfred Mutua (Maendeleo Chap Chap) and also Eliud Owalo (Deputy SG, UDA).