You Both Know My Son - Mwendwa Mbijiwe's Mother Message to Uhuru, Ruto

By RIFT.VALLEY.NEWS (self meida writer) | 3 days 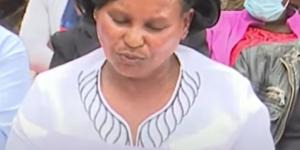 Security analyst Mwenda Mbijiwe’s mother Jane Gatwiri is disappointed over the state organs' failure to offer information on the whereabouts of her son.

Gatwiri stated that Mwenda was not a stranger to President Uhuru Kenyatta and his deputy William Ruto yet their government has done very little to find out his whereabouts.

Gatwiri also faulted the manner in which the investigations were being conducted. She indicated that her son's car and belongings that were found on a farm in Kiambu county were handed over even without a statement from the police.

“I have seen publications stating that my family wants him dead or alive. I want to correct this statement. I know that he is alive and being kept somewhere and the government knows it,” she said.

The family and friends of Mwenda have issued the government with a 10-day ultimatum to produce Mwenda who has been missing for more than a month now.

Failure to do this, they threatened to storm into the Regional Commissioners office and shut down operations in protest and to demand information on his whereabouts and status of the investigations.

“We have been having peaceful demonstrations but the community is getting frustrated and therefore we have decided to block roads to express their displeasure,’’ stated MCA George Kimathi of Timau ward.

Steve Ringera who is a friend to Mbijiwe stated that there was no way a security advisor would go missing and the state fails to notice.

“We feel neglected especially when I see his mother crying and nobody is doing anything to help,” added Ringera.

During a press briefing on Jul 3, 2021 It was revealed that Mwenda disappeared en route to check on his mother at Kimbo Village in Meru County before his car was later recovered at Kamiti corner.

Jane thanked the media for the continued coverage of the story of her son and she expressed confidence that her son's whereabouts would be discovered.

Mandago Sends Passionate Appeal to Gideon Moi as He Reveals This About Kutuny, Oparanya