"There is No Problem Baba Coming to Mt Kenya, He Has Helped Us" Kanga'ta Sarcastically Hits on Raila

By TeresaKE (self media writer) | 2 months ago 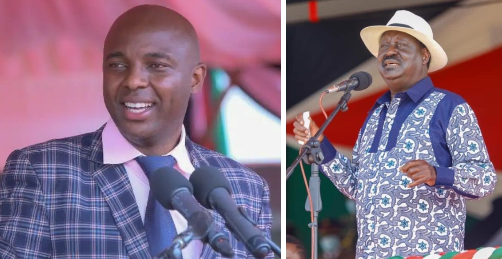 Murang'a Senator Irungu Kang'ata has sarcastically hit on the former Prime Minister Raila Odinga over his recent three day tour to Mount Kenya, which later culminated to a meeting with Influential persons from the region at Safari Park on Tuesday, where they endorsed him.

Speaking in Mukurweini, Nyeri County on Wednesday during the burial ceremony of Nyeri County Assembly Speaker John Kabuchia's father, Mr Richard Kabuchia, Kang'ata stated that the meeting has helped the region in knowing which kind of a leader he is.

"I did not see any problem in Raila meeting the elders from our region, they are the same people who campaigned for Moi in 1997 and he failed, even now they will fail. I did not see any mama mboga, boda boda or a coffee farmer," said Kang'ata.

According to Kang'ata, their counterparts from the region in both the Senate and the National Assembly lost their positions after handshake, the price of basic commodities also skyrocketed after handshake, and the presidents was dragged in changing the constitution to some extend abandoning the Big Four Agenda.

Kang'ata further claimed that the Mount Kenya residents will have a hard time under Raila's presidency, and warned them that failing to elect Deputy President William Ruto will come to haunt them in future.

He further drummed up his support for Ruto's presidential bid come 2022.