"I'm Impressed" Hon. Raila Says Before Purchasing One of Laikipia Made BJ-50 Vehicle At This Price

By KrimeExpert (self media writer) | 27 days ago

The former prime Minister of Kenya and Orange Democratic Movement party leader, honorable Raila Odinga has allegedly purchased one of the Laikipia Made Bj-50 Vehicle.

According to the reports given by a reliable source of information, it has been revealed that the former prime Minister of Kenya allegedly bought the vehicle for ksh. 450k in attempts to support the local entrepreneur who created it.

In his own words, honorable Raila Odinga said that this is what Kenyan Youths need adding that instead of being given empty promises, Kenyan Youths needed good jobs in order to boost their businesses and skills which might end up elevating the country and lower the already rising cost of living.

In the past few days, honorable Raila Odinga has been on a mission to get the peiole of Mount Kenya region to vote for him after touring the region with a number of politicians. According to the reports given by Raila, he said he was the best candidate who'll bring change in the country.

His actions has sparked Alot of mixed reactions from a number of kenyans who seemed to have different opinions and suggestions on the matter.

With a section of kenyans congratulating him for doing this claiming that he is currently supporting local talent, others went ahead and called him out accusing him of doing this for clout and political purposes.

According to the reports given by most Kenyans, they claimed that it was so wrong for the former prime Minister of Kenya and Orange Democratic Movement party leader to buy such a vehicle which he wasn't going to drive.

Expressing their thoughts on the matter, they claimed that he instead should have looked for an alternative of helping the owner to make more improved vehicles which can be sold to locals and other international companies. 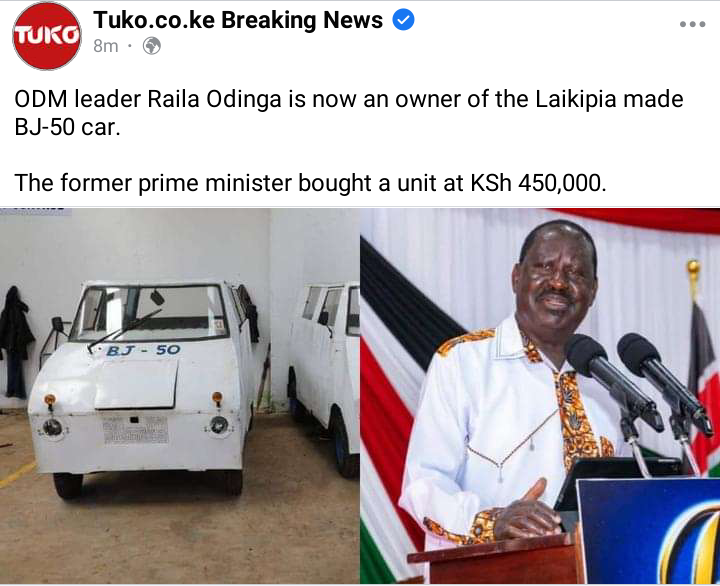 Latest Warnings Issued By The Government On Media Houses