By Wattson (self media writer) | 2 months ago

Hon. Member of Parliament for Pokot SouthDavid Pkosing claims that they are now prepared to gather signatures for the purpose of impeaching the Hon. Moses Kuria tomorrow amid the ongoing debate over GMO maize, which arrived in the country on Tuesday, November 22, 2022, early morning. 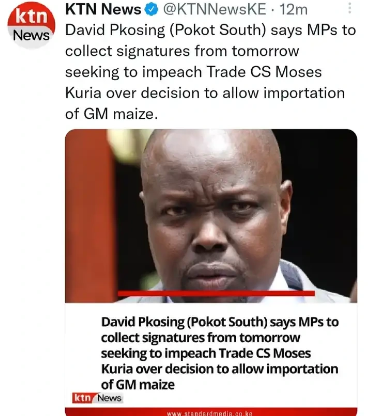 Speaking to KTN TV, the legislator echoed Nandi Senator Samson Cherargei's assertion that the CS allegedly ordered the importation of GMO maize, which has been criticized by both the opposition and allies of Kenya's Kwanza government.

The legislator said that the current move was wrong and that Trade CS didn't get permission to tell people to import maize. He also said that Parliament has always said what's best for Kenyans and rejected what wasn't far aside.

Following the appearance of the maize in the country, a segment of the individuals from parliament this midday recorded a movement to protest the importation of the maize adding that piece of the district the nation over for example Western Locale, Trans Nzoia and Uasin Gishu regions are the ongoing harvest. 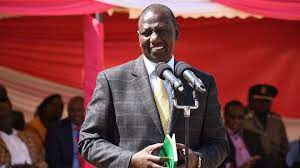 Today, the legislator and other MPs agreed in Parliament that CS Kuria would appear before the panel and be held accountable for his decision to rule on matters that affected Kenyans.

Content created and supplied by: Wattson (via Opera News )