As of at this moment, exactly 34 days remain till the nation's general elections to choose its fifth president, while the current leader, Uhuru Kenyatta, is anticipated to leave politics. 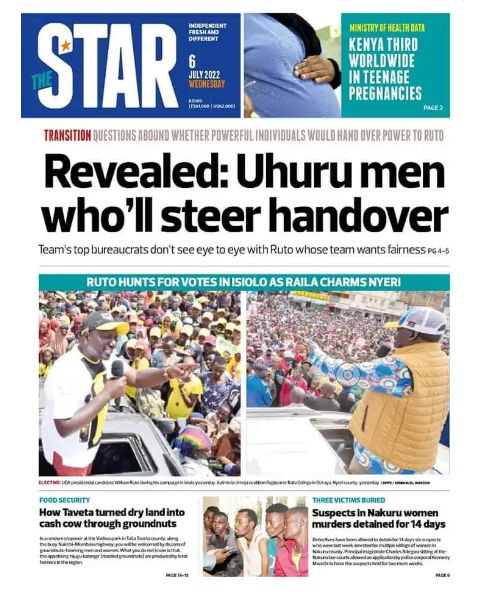 There has been a perception across the nation that the president will continue to be actively involved in politics through the head of the orange Democratic movement, Raila Odinga.

A while earlier, the president himself was overheard declaring that he would not transfer authority to a crook who had not been named.

The president has assembled a group of strong men to play the handover game, according to today's Star Newspaper.

The guys in the Frontline who are prepared to lead the event are those known as bureaucrats, according to the publication, although William Ruto, the vice president, is getting most of the spotlight. The star observes that the second in command differs from the individuals stated before.

"Uhuru men who will direct the handover have been revealed. William Ruto's team demands fairness, but the senior bureaucrats on the team disagree. There are many doubts about whether influential men will cede power to Ruto, "the headlines in the star newspaper said.