By ThePolitician | self meida writer
Published 8 days ago - 0 views

Flamboyant Businessman and lawyer Donald Kipkorir has sparked reactions online after criticising a section of Kenyans who blame the Jubilee administration for its failures but still want to vote into office leaders in the same government in the 2022 General elections. 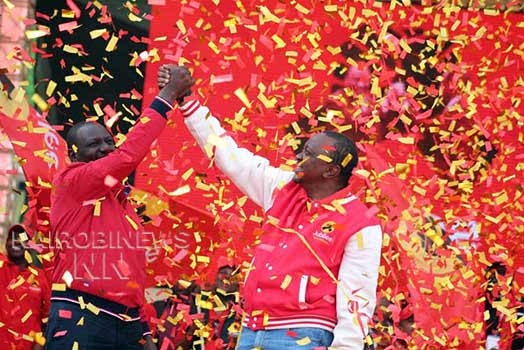 Penning his thoughts in a post on his Twitter page on Tuesday, Kipkorir criticised Kenyans who voted in the Jubilee Adminstration instead of former Prime minister and Orange Democratic Movement party leader Raila Odinga on the ballot expecting massive development But are now making complaints against the Same leadership after failure by the Government to meet their expectations, but want to vote back Jubilee into power again come 2022 saying that can only be witchcraft, a post which has illicited mixed reactions from Netizens. 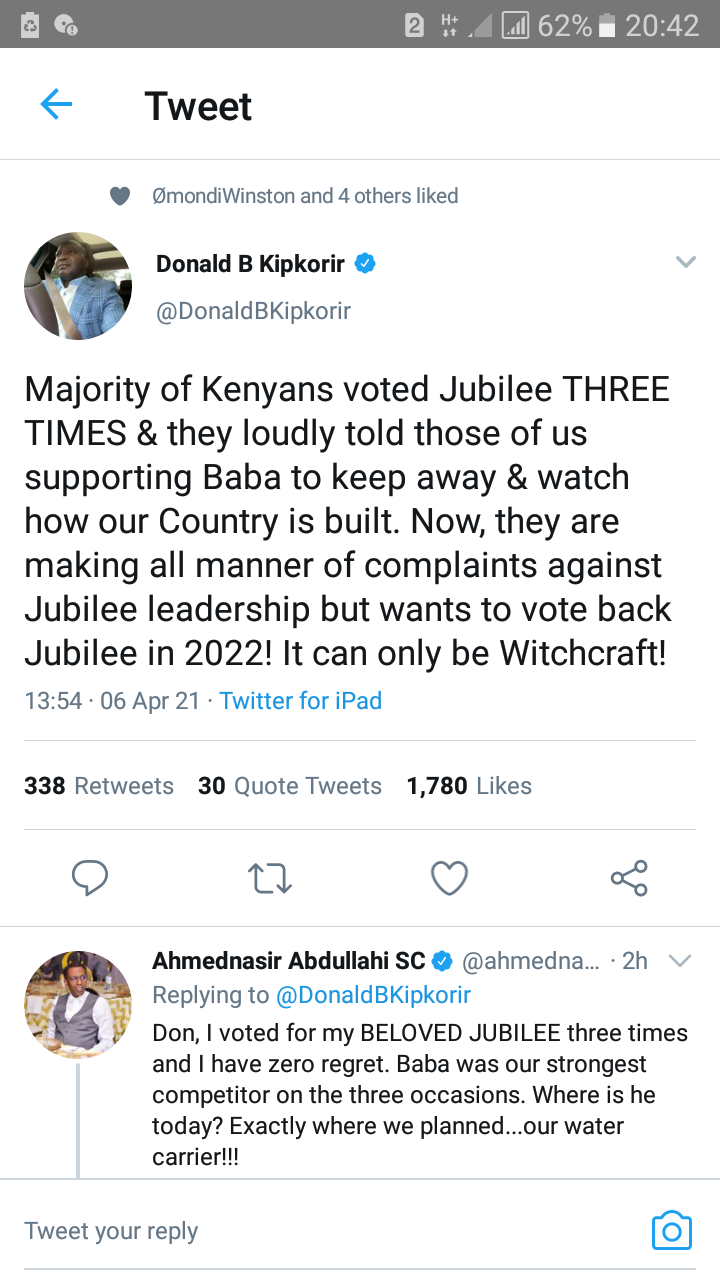 "You nailed it Don Some even lack shame by telling us Ruto is our savior. They're telling us, how, if the system and the deep state go for Gideon Moi, people will reject him in favor of one and only William Samoei Ruto, like he's the only one entitled to presidency

"Uhuru & jubilee are careering off course contrary to what most people thought. Total disgust. We will never again, elect political party or ethnicity. We want integrity, responsibility & accountability. We don't care where such will come from, it's all we want even if that's you." A comment read.

"Don are you claiming Raila didn’t WIN Tuesday 8th August 2017? Have said it, will say again: Raila Odinga won 2017 Presidential elections. As of 2007, jury is still out there, but as well Mwai Kibaki did so well. 2022 “we” aren’t voting your man Gidi. RUTO, RAILA, KITUYI, maybe!" A comment read.

"Don, I voted for my BELOVED JUBILEE three times and I have zero regret. Baba was our strongest competitor on the three occasions. Where is he today? Exactly where we planned...our water carrier!!!" A comment read. 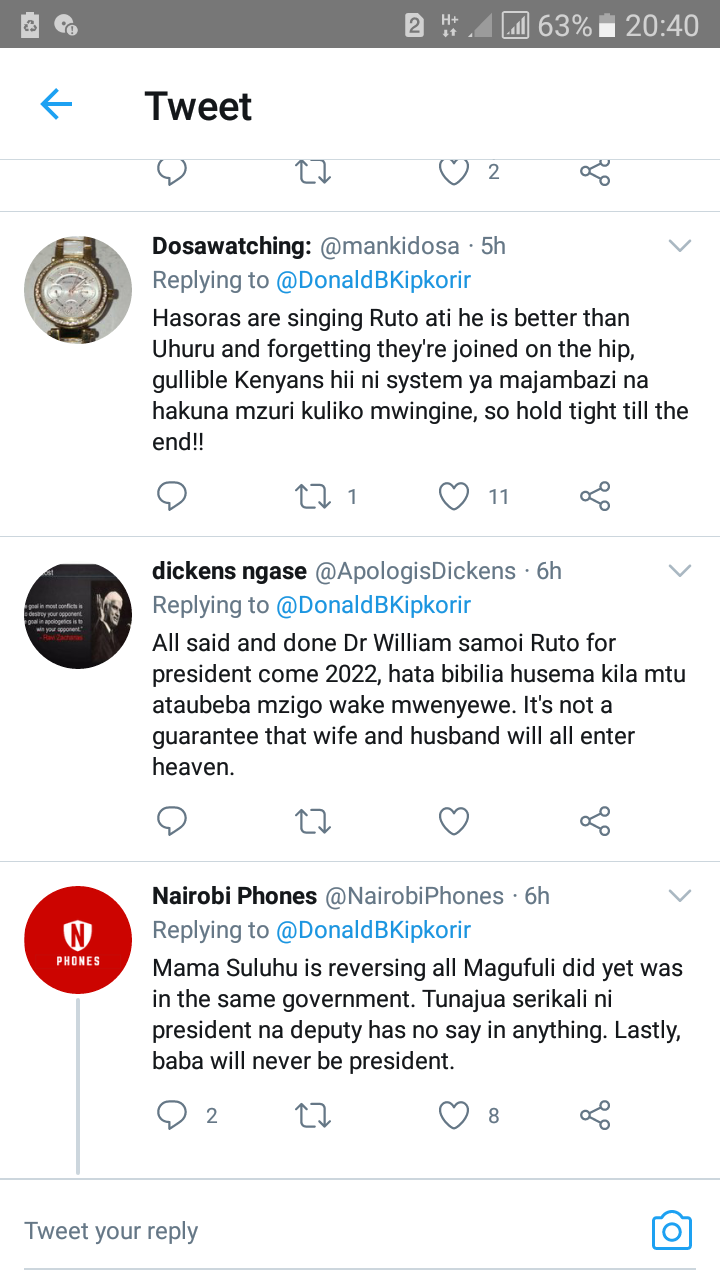 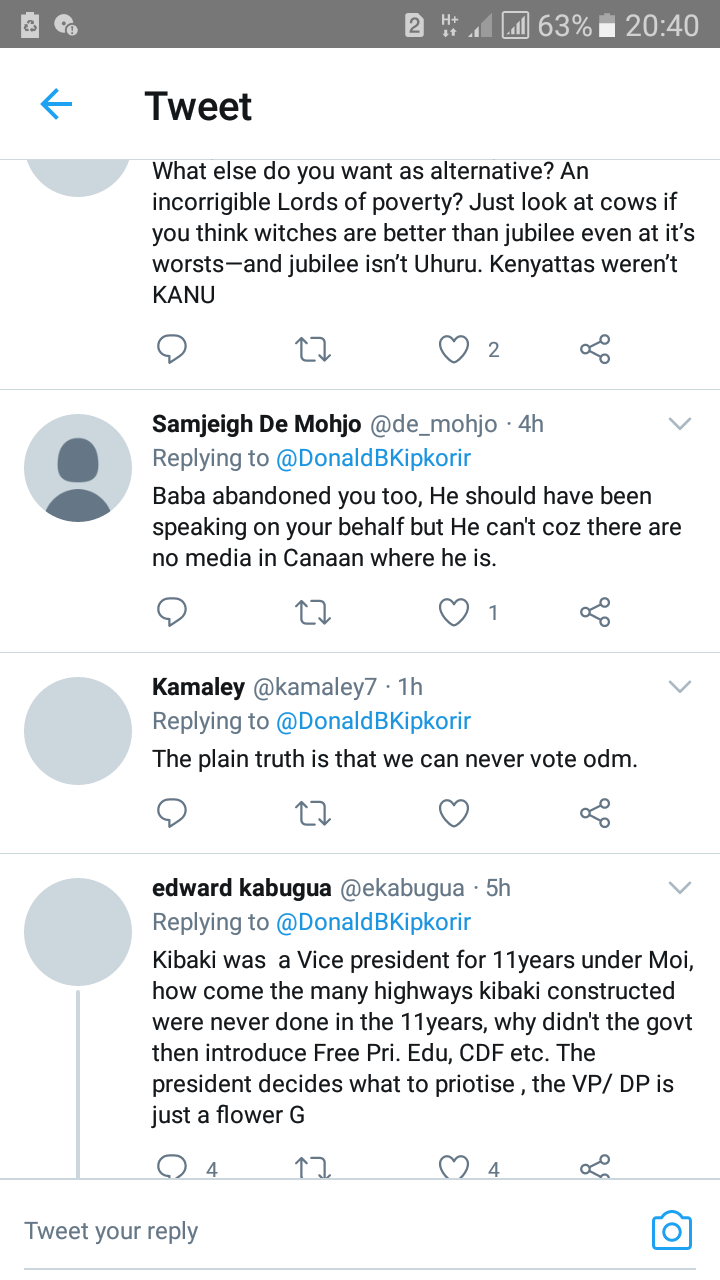 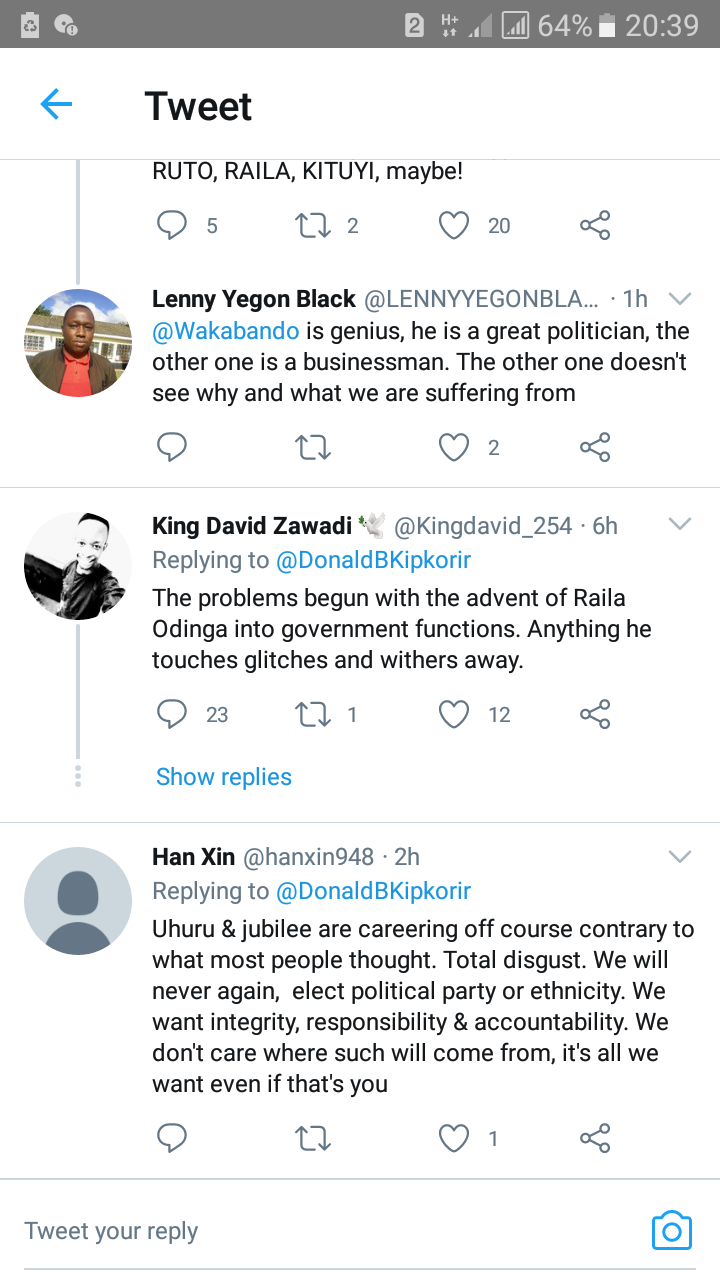 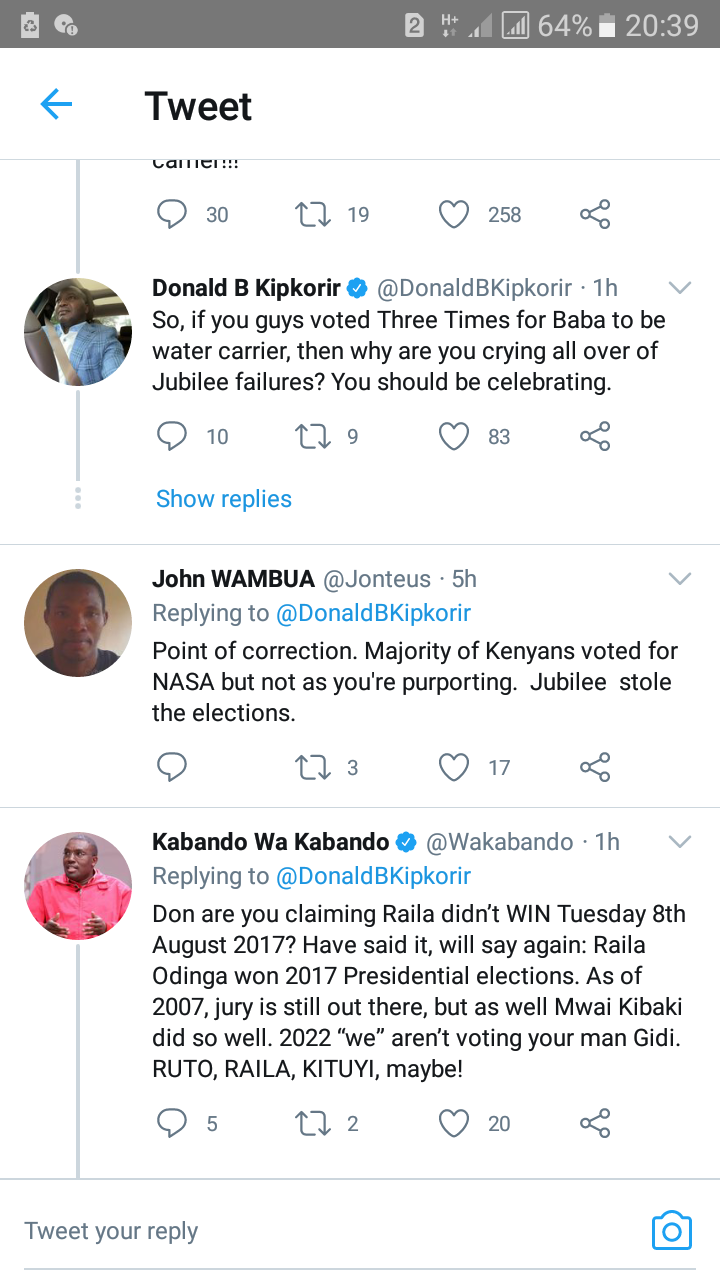 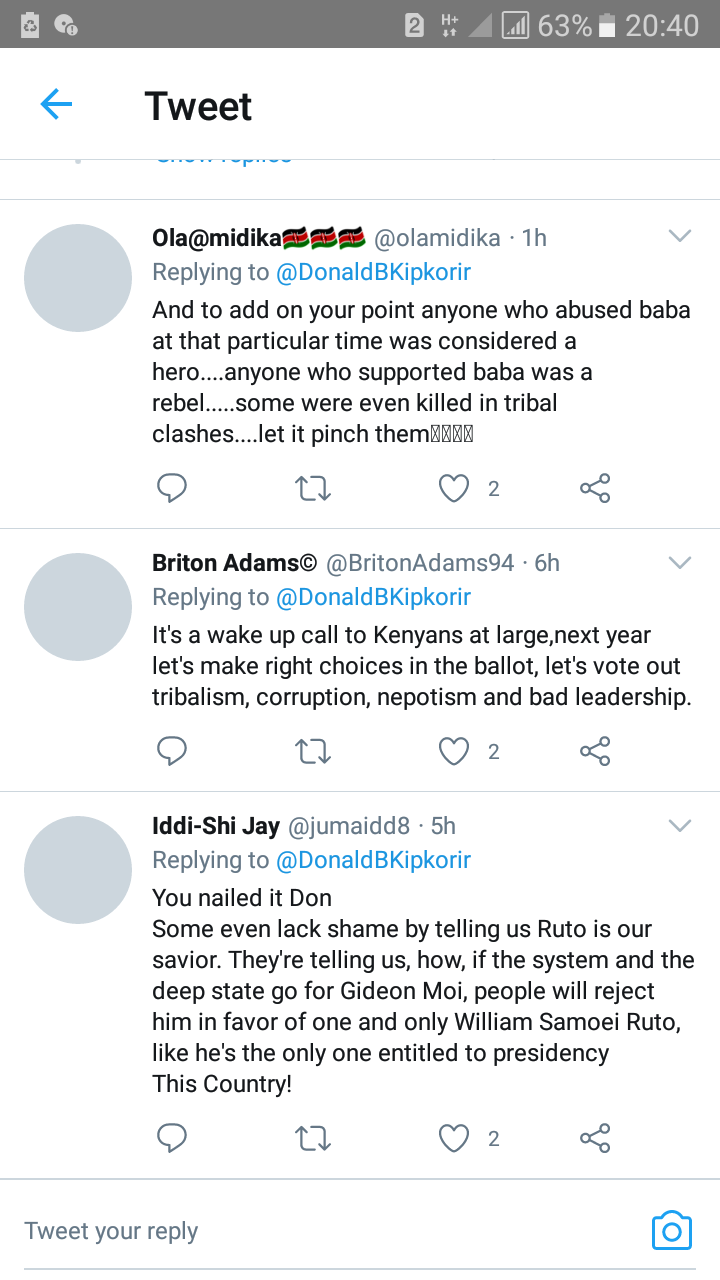 Don Some Donald Kipkorir Jubilee Kenyans William Samoei
Opera News is a free to use platform and the views and opinions expressed herein are solely those of the author and do not represent, reflect or express the views of Opera News. Any/all written content and images displayed are provided by the blogger/author, appear herein as submitted by the blogger/author and are unedited by Opera News. Opera News does not consent to nor does it condone the posting of any content that violates the rights (including the copyrights) of any third party, nor content that may malign, inter alia, any religion, ethnic group, organization, gender, company, or individual. Opera News furthermore does not condone the use of our platform for the purposes encouraging/endorsing hate speech, violation of human rights and/or utterances of a defamatory nature. If the content contained herein violates any of your rights, including those of copyright, and/or violates any the above mentioned factors, you are requested to immediately notify us using via the following email address operanews-external(at)opera.com and/or report the article using the available reporting functionality built into our Platform 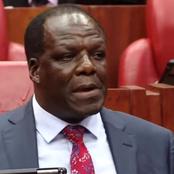 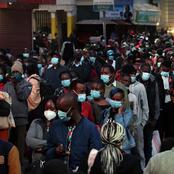 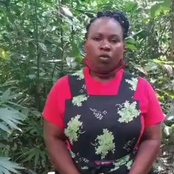 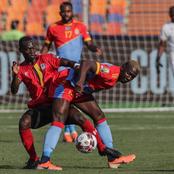 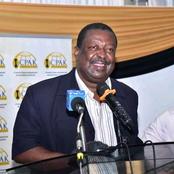