Is Duale Agitating for NEP Youths? See What He Is Agitating For, Not The Deregistration Of Our Youth 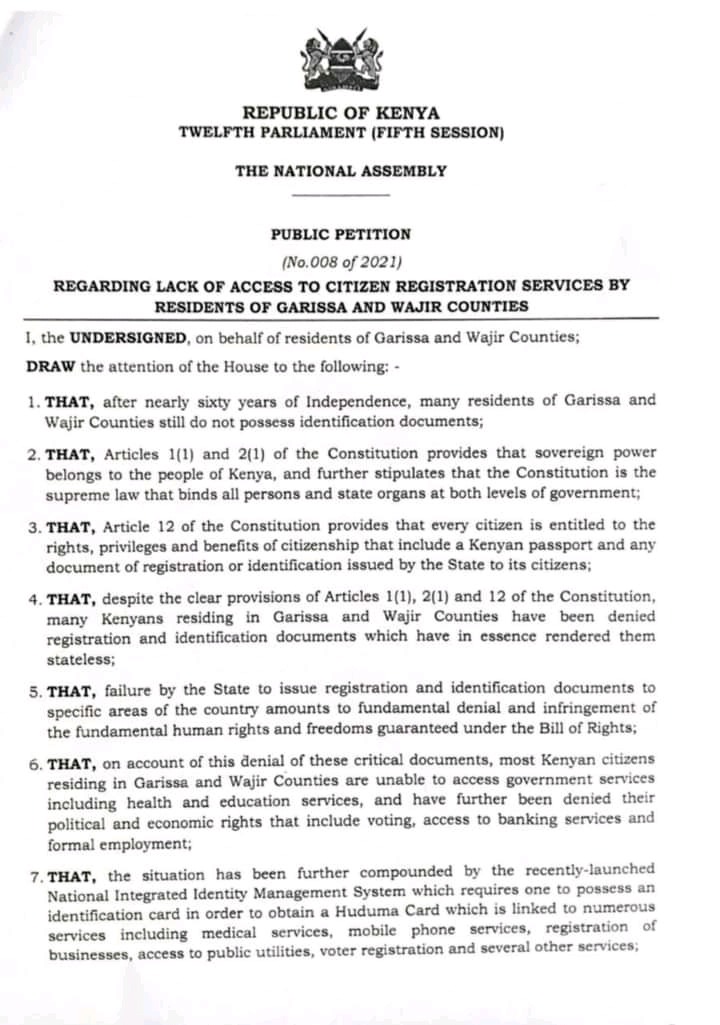 Photo: A copy of the public petition tabled on the floor of the house by Garissa township MP Hon. Aden Duale.

Befrore the 4th March 2013 Elections, an informal political alliance was formed between the then United Republican Party (URP) of the deputy president William Ruto and The National Alliance (TNA) of president Uhuru Kenyatta.

On the 4th of March 2013, the elections were held and the two won the elections as the president and the deputy president respectively, the national assembly leadership and the senate leadership positions as well as the cabinet positions were shared among the two parties with URP taking the national assembly majority leader position a position held by Duale and some other key cabinet positions, the senate majority leader position then held by the current Tharaka-nithi senator.

In the course of that five year term, a crackdown dubed "Fagia magaidi kutoka Islii" was kicked off and for that reason the kasarani detention camp was formed. Many minors including old and young mothers were forcefully evicted from their homes by the rogue kenya police.

As the majority leader, Aden Duale's voice condemning the illegal move was not heard. In his reign, the Garissa university attack took place, it claimed the lives of over 140 students of the university, he called for a press conference condemning the act and called for the closure of the refugee camps.

On the 4th of August 2017, Jubilee won elections which was later nullified by the supreme court, another election was held Jubilee party emerged the winner unopposed, Duale retained his position and the majority leader position of the senate was assigned to Elgeyo Marakwet senator, Kipchumba Murkomen.

Ironically, Duale tabled a public petition on the floor of the national assembly on the 24th of March, the petition was adressed to the house departmental commitee on Administration and national security chaired by the late kiambaa MP Paul Koinange deputised by the Wajir Women Rep, in his petition Duale called for the deregistration of about twenty thousand youths from the counties of Wajir and Garissa who are double registered in the refugee database.

As we all know Duale and the said departmental committee vice chairperson are of the same ethnicity, Duale's move is political, a political move that is aimed at advocting for actual refugees to be deregistered so that the number of votes of his ethnic community doubles and clinch on the Wajir county top seat of governor and that of Garissa county which he is aspiring to run for it but his moves have long been detected.

Content created and supplied by: Abukar23 (via Opera News )

Women MPs Meet To Celebrate Women In Leadership At Kempinski