It has now emerged that Musalia Mudavadi and Moses Wetangula promised to deliver 70% of western votes to Kenya Kwanza,this is according to Kithure Kindiki who recently quit politics for a sabbatical leave after being short changed,in an exclusive interview with citizen TV, Kindiki refuted claims that Kenya Kwanza didn't give the two co principals a condition,speaking last week in a political rally Bungoma senator Moses Wetangula denied those claims that their were no percentage of votes Deputy President William Ruto gave them when they were signing their deal.

His statement contradicts with Kithure Kindiki affirmation which in his interview,Kindiki told Waihiga that it was on the agreement that he himself drafted that Musalia Mudavadi and Moses Wetangula were told to bring that number or they won't get the cabinet positions they were promised if Kenya Kwanza wins in the upcoming genera elections,Musalia Mudavadi influence in western Kenya is something Dp William Ruto should worry. 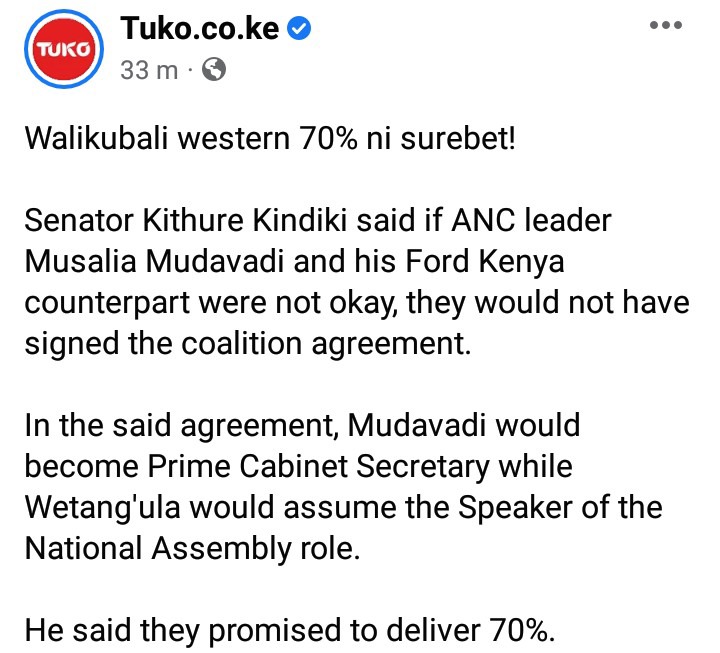 With Martha Karua being picked as Azimio La Umoja running mate this has complicated things in Mt Kenya which will force Deputy President William to start camping in Mt Kenya.

Mike Sonko Comes To The Rescue of Boxer Conjestina Ochieng