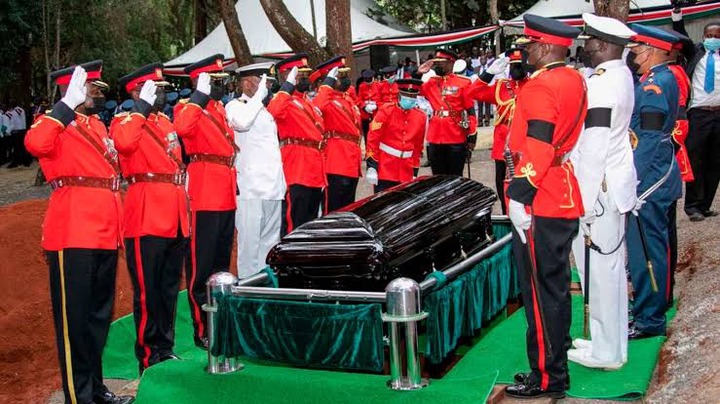 A month after the death and subsequent burial of Kenya's third president Mwai Kibaki, budget estimates tabled before Parliament have revealed the millions spent in the befiting send-off.

According to estimates tabled before Parliament seen by Business Daily, treasury cabinet secretary Ukur Yatani released a total of two hundred and sixty million (260,000,000) from public coffers to finance all protocols that were observed during Mwai Kibaki's send-off.

The monies were probably used to arrange all military activities during the burial preparations, medical maintanance of the body and transport costs.

In the year 2020, the government splashed a total of three hundred million (300,000,000) in the preparations and burial ceremony of the late president Daniel Arap Moi.

From those figures, it is clear that there is a forty million ( 40,000,000) difference between the amount spent in president Mwai Kibaki's and Daniel Moi's funeral preparations and ceremony. The activities and protocols observed during the burial of the two presidents is are almost the same but with different figures of costs attached to the.

Why do you think a less amount was used in president Mwai Kibaki's funeral preparations compared to the late president Daniel Arap Moi's? Is it worth it for the government to spent this much in state funerals?