Earlier on this morning, reports surfaced that if Deputy President William Ruto who is vying for the Presidency on a United Democratic Alliance party ticket wins the August General Elections, he would be probing President Uhuru Kenyatta on corruption allegations.

The news was not received well by many factions across the board who have been trading divergent views all morning on what the Deputy President William Ruto meant by that statement.

President Uhuru Kenyatta, while addressing a gathering at Kenyatta International Conference Center in Nairobi, took a subtle dig at Deputy President William Ruto on a matter of factors chief among them being his recently launched manifesto.

This afternoon, according to reliable reports from Tharaka Nithi County where the Deputy President is addressing residents, he has clarified that he will not be going after President Uhuru Kenyatta if he wins the August Elections.

The DP has said that he has no problem with President Uhuru Kenyatta and that no one will be coming after him after August 9th when Kenyans take to the polls to elect a new President.

President Uhuru Kenyatta will be retiring from the seat after ruling Kenya in the past ten years where the country has seen tremendous progress across the board.

The Deputy President has said, in Swahili, that there will be no one who will be going after President Uhuru Kenyatta or doing anything to him as per the reports that we have.

The video, from Tharaka Nithi County shows the Deputy President addressing the residents of the quiet town who were all cheering at him as he gave the speech. 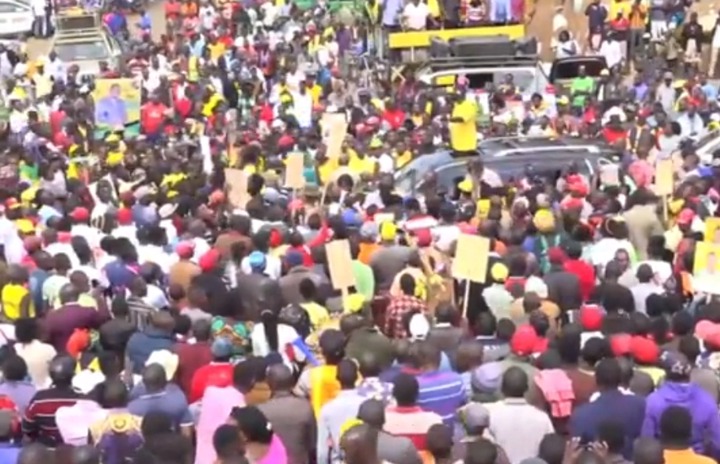 Picture courtesy. Deputy President William Ruto addressing the residents of Tharaka Nithi County this afternoon where he is holding a rally.

Exact Time The 5th President is Set To Be Announced Revealed

Quiet In Raila's Home As Ruto Prepares To Leave For Bomas, Here Are The Major Differences