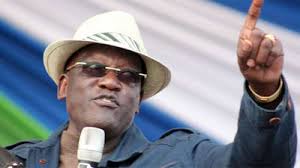 Of late the relationship between the two has not been good. Uhuru Kenyatta at a time even asked Ruto to step down from his role as DP due to the critics he was making on the government.

Among the demands laid down by a section of Uhuru Kenyatta allies were for Deputy President William to accept that he was the one who has wronged President Uhuru Kenyatta. Nyeri MP, Ngunjiri asked DP Ruto to humble himself and issue a public apology to Uhuru Sincerely and genuinely.

Ngunjiru also stated that after the apology, it is President Uhuru Kenyatta's right to either accept the apology or reject it. Without these conditions, DP Ruto should not expect to be forgiven and be supportedin the race to 2022 General elections.

Muthama has stated that they would not tolerate those demands for Uhuru's Hardliners because they are meant to make Ruto drop his presidential ambitions to Raila. Muthama also added that Kenyan President is not all about dynasties and Ruto can as well be the President.

"We're not BOARDING. So called TOUGH TERMS by Uhuru's Men to force @WilliamsRuto to drop AMBITIONS for handcheque partner, @RailaOdinga is DEFECTIVE, FRIVOLOUS & lacks MERIT. Kenya's Presidency is not preserve of OLIGARCHS/DYNASTIES. @WilliamsRuto can as well be the next PRESIDENT", Muthama stated.