Gloves Off as Kabando Hits on Uhuru & Raila Over Graft, Reveals Alleged Funds Looted Under Them 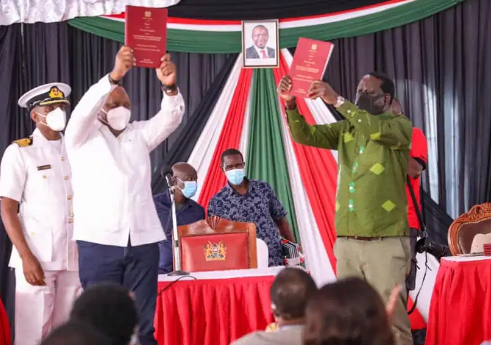 Over the weekend the Former Prime Minister Raila Odinga and Deputy President William Ruto exchanged words in different functions over allegations of corruption.

The ODM leader without mentioning names on Saturday criticized leaders splashing millions money in churches donations, with DP Ruto responding on Sunday that he will continue helping the churches in their developmental projects.

The Former Mukurweini MP Kabando Wa Kabando through his Twitter account on wee hours of Monday morning told off the president and Raila for taking Kenyans for a ride, by converting the BBI to a 'money-source.' 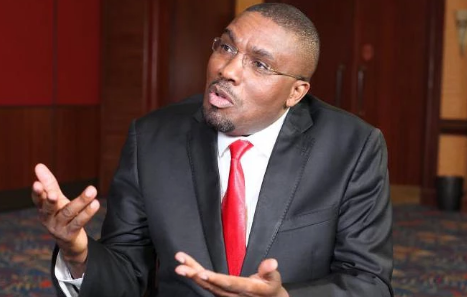 He urged those supporting the BBI to move on, claiming that the process was made to extract money from Kenyans.

He alleged that Sh14 billion of public funds had been used to push for the unconstitutional process.

"BBI was converted, nay hijacked, midstream to become a deodorant for graft. The sooner those innocently aboard BBI deception train realize that Uhuru and Raila has absoultely mno moral authority yo lecture anyone anti-graft cases the better. Sh14 billion looted via BBI fraud, a waste," he posted. 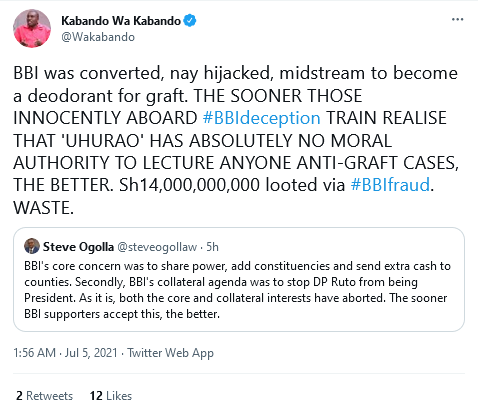 The lawyers who represented President Uhuru Kenyatta, ODM leader Raila Odinga, IEBC and the BBI secretariat at the Court of Appeal called upon the judges to overturn High Court ruling claiming that it is Kenyans democratic right to amend the constitution.