By STEPPED (self media writer) | 4 months ago Tomorrow will undoubtedly be UDA's big day, the day when the party's nationwide nominations will take place. The deputy president —Dr William Ruto in the past promised that his party would ensure free and fair nomination for all of UDA's aspirants running for various positions, saying he will personally take charge of the nominations. Speaking to the press in the past, the second in command said the party has allocated more than KES500 million for the same event.

At the same time, President Uhuru Kenyatta is scheduled to visit Mt Kenya on Thursday. But his mission is different, at least according to the Nation.

Reports indicate that the head of state will attend the 'Holy Oil' event, at the African Independent Pentecostal Church of Africa(AICPA) at Gakarara, Murang'a county.

The church had splintered into three groups, and each group was led by an Archbishop. Behind the scenes, the president is said to have been working hard to reconcile the leaders of the three groups, and it seems his vision would soon come true.

"The President has worked so hard to (reconcile) the three and as of now there is a truce where a rotational leadership has been brokered, with Mr Muthuri scheduled to lead until next year," said Paul Gichu, the National AIPCA chairman.

Mr Muthuri is the current Archbishop of the AIPCA church and will lead the church until next year, when he will hand over the church leadership to another Archbishop from one of the splinter groups.

To area leaders in Muranga, they have welcomed the president to the region —even those in DP Ruto's camp. Irung'u Kang'ata has informed that he will not be attending Uhuru's event, but said that the head of State is welcome to his county.

“I hope he will not cancel the visit and proceed to deny that he never intended to show up, like he did recently when he called us to a State House meeting through messages on our phones only to later disown the invites,” posed Kang'ata. 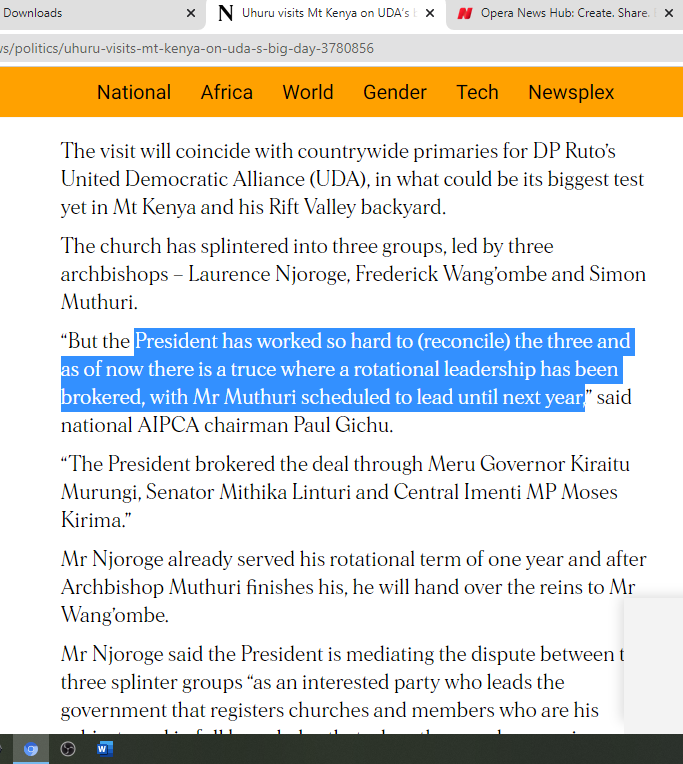 22 Governors, 24 Senators and 162 MPs Expected To Throng Karen Today For A Meeting With Ruto-Rigathi

SC Ahmednasir's Latest Message To Raila's Camp, Alleges That His 2017 Demands Were Met In 2022